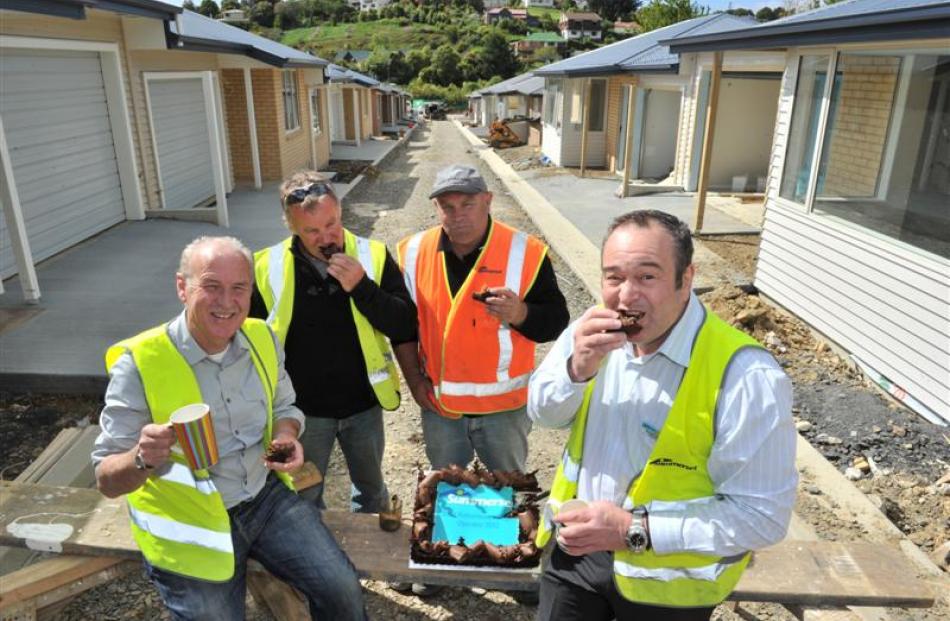 Celebrating an award and the construction of a retirement village in Dunedin being on schedule to welcome its first residents at Christmas are (from left) Summerset at Bishopcourt sales manager Tony Bennett, site foreman John Sinclair, site contract...

The $15 million retirement village being built in Dunedin is on track and will be ready for its first residents in Christmas.

Summerset at Bishopcourt village manager Russell Walters said the first stage of construction on the 1.9ha site in Wakari included 30 two-bedroom villas and, despite some bad weather, would be ready for its first residents late next month.

A smaller one-bedroom apartment was also being built for a Hawkes Bay grandmother who had been coaxed back to Dunedin by her grandchildren, he said.

Mr Walters had managed the Queenstown apartments Mantra Marina, but felt ready for the career change to managing the retirement village after caring for his mother for seven months after she had a stroke.

The second stage of construction had begun and included another 30 villas, he said.

The third and final stage would include 20 apartments, 20 care apartments and a 40-bed care centre with hospital level care, he said.

The village would include a cafe, resident bar, hairdressing salon, a doctor's room, library and bowling green, he said.