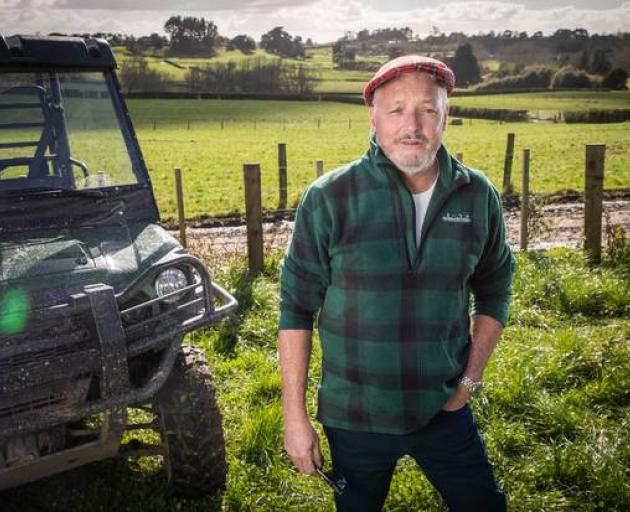 Garry Robertson's bought up land housing 40,000 people and is finally coming out of the shadows. Photo: NZ Herald

He's one of the most influential people in New Zealand and nobody knows who he is.

Dressed in a World's Fastest Indian T-shirt, jeans, and brushed-wool jacket, offset by his Red Band gumboots, he wanders across open fields and muddied paddocks breathing in the air.

An architect on a field trip? Gentrified farmer perhaps?

"In the Red Bands, they don't see me coming," says secret millionaire Garry Robertson, a Mosgiel-born entrepreneur who was once an apprentice electrician at Dunedin Railways.

For two decades, the 59-year-old has quietly snapped up key chunks of greenfields land for "national development entities" that now boast homes for more than 40,000 people.

He has helped mastermind some of Auckland's most substantial new housing developments, including Milldale, Millwater, Silverdale, Flat Bush, Pokeno, Karaka, Tuakau and Drury, turning over billions of dollars, while personally owning great swathes of land.

Robertson doubts anyone has bought more land in New Zealand than him.

And yet, who is he? He doesn't feature on the annual rich lists. He collects classic cars and motorbikes, but doesn't host glitzy celeb bashes on waterfront yachts.

But after a lifetime of flying under the radar, quietly making deals, father-of-four Robertson is finally emerging from his self-imposed anonymity.

He's funded a new documentary on the life and beliefs of the late social reformer Celia Lashlie that has just been accepted for the New Zealand International Film Festival this year.

He's sponsoring the great-nephew of legendary Kiwi speed king Burt Munro, who was immortalised on the silver screen by actor Anthony Hopkins in The World's Fastest Indian, for a return to Bonneville Speed Week at the Utah Salt Flats in August.

And now he's bought a major property development outside earthquake-hit Kaikōura. Ocean Ridge is 335 acres of land, with plans for 450 sites, predominantly set aside for quality residential housing, as well as a mix of retail, light commercial, apartments and tourist accommodation, perched on top of a rolling hillside, looking across to the often snow-capped Kaikōura Ranges down to the Pacific Ocean with breaching whales and dolphins.

For the Mosgiel-born entrepreneur, who was once an apprentice electrician at Dunedin Railways, and worked at NZ Electricity and Tiwai Point smelter, the long-term project is a labour of love.

"This is my opportunity to come home back south and enhance an area I feel really good about," he says.

"I love the sheer grandeur of the southern landscapes and I see incredible potential in the town and its people. I'm hoping to add some real cohesion and momentum to a town and community well deserving of it. Kaikōura is world-class by anyone's standards and totally under-rated. There is simply nowhere else in New Zealand like it."

Robertson's passion for housing runs deep. It stems from a painful encounter nearly 50 years ago.

After returning home from a few jugs at lunchtime, Robertson's father started arguing on the front lawn with his son, then barely in his early teens.

It stuck with the youngster. He vowed to prove his old man wrong.

Reading Sir Bob Jones' 1977 best-selling book, Jones on Property changed his life and showed how it was possible to buy property without any money, "just a well-negotiated and structured deal", which he still adheres to.

Robertson quickly began buying and selling homes and land, before devoting himself to a real estate career at 26, firstly in Southland selling houses and farms, then Christchurch, and before long, nationwide.

"I worked like a Trojan to make sure I could buy that [Mosgiel] house," said Robertson, who now lives on a sprawling Karaka farm.

"And I finally realised, not that long ago, that it was my Dad's fear I wouldn't amount to anything, not mine. It just took me 40-odd years."

The property expert has strong views on the New Zealand housing crisis. He believes there isn't one, other than in Auckland and it's easily solved, "simple and perfectly logically", with minor reforms.

"But the more I look at it, the more I firmly believe that these people – both Labour and National – don't actually want to solve the problem. They don't want to hear what's going to fix it and have gone so far down the wrong road it's ridiculous. We will still be ploughing the same field for the next 20 years if they don't stop chasing their tails and actually adopt a plan that works."

He believes the Government needs to embrace the expert knowledge of New Zealand's successful developers who have "weathered the storms over the years and come out the other end".

"I want every New Zealander to have their own home, their own lawn to mow, roof to paint and driveway to sweep. With that ownership, goals and dreams, comes a lot of pride and self-respect, and I believe that a lot of our drug, alcohol and family violence problems would disappear overnight, if we can just empower the people to realise their dream to have and own their own home we'd grow a nation of proud people, not people looking to self-medicate because they are drowning in unrealised potential.

"Buying a home in today's climate puts a massive strain on people's lives – their marriages, businesses, health. Everything is at breaking point; there's no head room left as the prices spiral out of control. It's just wrong. I just don't get why we can't do it. It is perfectly logical and if one of the governments of the day just stops for a breath, resets its destination, gets back on the bus and gets the job done, it won't even take long once they fully understand where they need to go and how to get there."

He's willing to stake his reputation on solving the crisis – and will happily stake his own hard-earned reserves on it.

"If the Government won't help the community achieve this, then I'll roll my sleeves up and pay for and do the job myself."

Even in Kaikōura, after he bought the Ocean Ridge project in its entirety from its original developers and long-time friend Robin Hughes of R D Hughes Holdings Ltd, he took the unusual step of removing all sections from the market. He also bought the balance on the open market, while rethinking "a new pricing structure" and direction for the sites – surrounded by a long-established golf course, winery, prime fishing spots, 3km of walkways, and 170,000 newly planted native plants - and has decided to limit the number of sites for sale annually.

"I want to ensure the land values reflect the quality and cost invested in the development and the world-class scenery on offer. It's only by doing this will we be able to realise the full potential of the development and economic benefit which will flow directly through to the community and start to get some real positive growth in the town itself."

He wants to attract young families, professionals, tradies, and retirees and everyone in between to live in the town that he believes should compete alongside booming places like Wanaka and Queenstown.

"There should be no reason why people who want to work hard can't fulfil their dream of owning a home and I'll help them. I mean, who wouldn't be proud to live in a spectacular place like Kaikōura, where people come from all over the world, and just say, 'Wow, look at this'."