Reward for an uphill battle 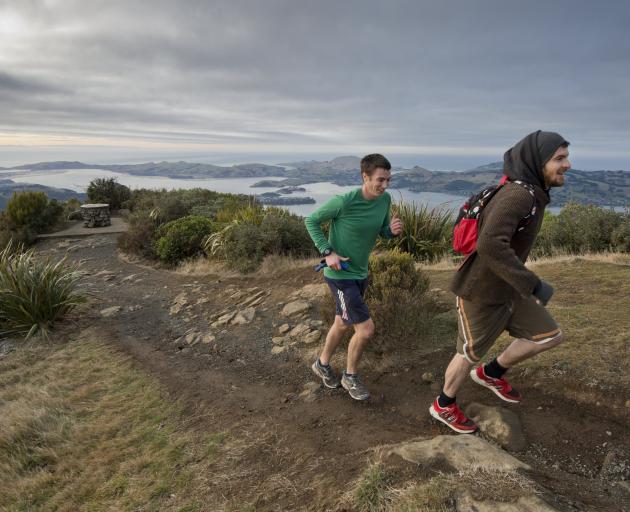 Brothers Rory and Callum McLean reach the summit of Mt Cargill during the Crush the Cargill event in Dunedin on Saturday morning. PHOTO: GERARD O’BRIEN
An uphill race is not for everybody, let alone 21 hours of it.

But for Andy Smith it was a climb to success, achieving first place in the Crush the Cargill event in Dunedin over the weekend.

He completed 13 laps up and down Mt Cargill, covering about 110km.

The "Longest Shortest Day" running event started at 8pm on Friday. Participants ran up the mountain once every hour and 40 minutes until only one exhausted runner remained on Saturday afternoon.

While it was in celebration of the shortest day of the year, the event was over before the winter solstice, which occurred yesterday morning.

About 50 people took part and about $1200 was raised for the Valley Project.

However, runners had to brave harsh conditions.

"Over Friday night it was a lovely starry night, with a brutally cold wind at the top of the mountain, and very still, calm, cold and damp at the bottom.

"You did not know where you wanted to be."

This year’s event also included Crush the Cargill Lite, starting on Friday evening, during which runners covered a 2.1km loop every hour so that in 24 hours they would have run, walked or crawled more than 50km, Mr Tripp said.

There was also the option of a "speed version" starting on Saturday morning, where each lap had to be completed by the runner 10 minutes quicker than their previous lap.

Hear the pipes are calling