Rising to the challenge of a stroke 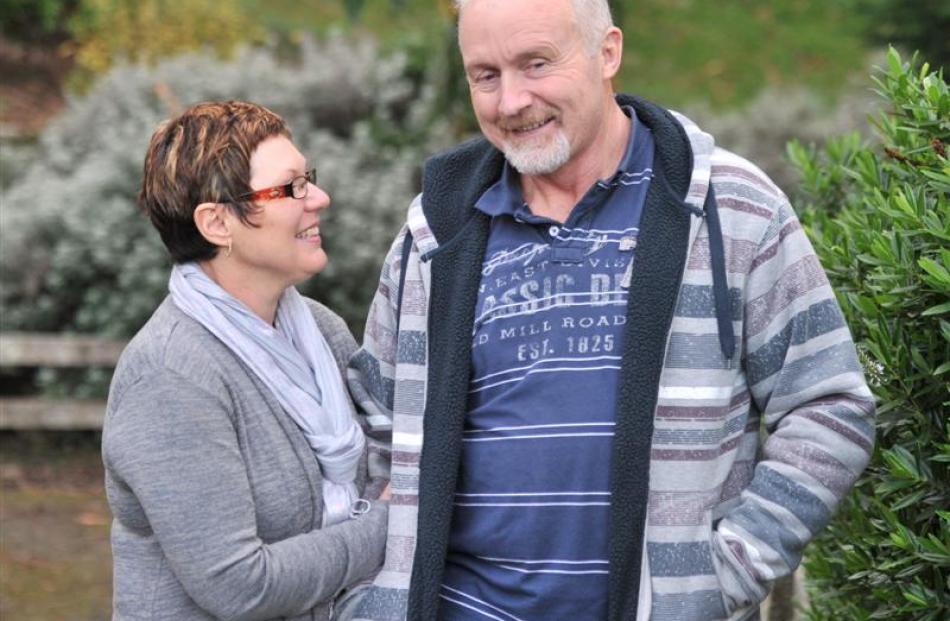 Dave and Brenda Griffin back home in Dunedin. Photo by Linda Robertson.

A stroke doesn't have to mean the end of everything Stroke survivor Dave Griffin and his wife Brenda travelled to Los Angeles for treatment that has given his rehabilitation a big boost. Reporter Eileen Goodwin spoke to the couple recently.

A Dunedin man thought to be the first New Zealander to undergo innovative stroke treatment in the United States believes it has improved his speech and walking, while reducing fatigue and pain.

Dave Griffin (55) and wife Brenda went to Los Angeles for a procedure using etanercept, returning last month. It was not a cure, but had improved his muscle flexibility, and he was now able to walk without dragging his right foot.

''This man hasn't stopped smiling since we got back,'' Mrs Griffin said.

The trip home was much easier than the trip there because of Mr Griffin's improved mobility.

He had the stroke in December 2012, and the couple just wish he had had the treatment sooner.

Mrs Griffin said the treatment put her husband in a good position for further rehabilitation.

She believed Mr Griffin was the first New Zealander to receive etanercept for stroke.

She had been determined the stroke would not spell the end of the life they had built together, and Mr Griffin has undertaken a rigorous rehabilitation schedule.

They spent three weeks in Australia in November last year for intensive speech therapy at the University of Queensland. Before then, they had not met another stroke sufferer with the speech disorder aphasia, which said much about the lack of networks and support in New Zealand.

When Mrs Griffin had recovered from her initial disbelief her healthy, fit and active husband had had a stroke, she set to work researching on the internet.

It was hoped Mr Griffin would be able to work part-time, and Mrs Griffin joked she had a list of chores awaiting him on their farmlet.

''A stroke doesn't have to mean the end of everything.''

A builder by trade, he used to work as a tutor at the Otago Corrections Facility.

Mrs Griffin is passionate about the wasted potential of stroke sufferers - many were needlessly in rest-homes, or simply not taking part in the activities they once enjoyed.

Once discharged from the health service, stroke victims were essentially on their own, and unless they had money to pay, usually received little further rehabilitation.

Mrs Griffin's ''dream'' was for Dunedin to become a stroke and brain trauma centre of excellence, and she was trying to link Australian researchers with those locally to stimulate more research.

Including treatment and all expenses, the trip to LA cost about $20,000.

Etanercept is injected into the back of the neck to rejuvenate with blood parts of the brain that are in shock from the stroke. Mr Griffin was suspended upside down for 10 minutes to allow the medicine to enter the brain.

Etanercept is used in New Zealand for other conditions, including rheumatoid arthritis, and could be given to stroke survivors off label if clinicians learnt the method from developer Dr Edward Tobinick. When Mr Griffin was treated by Dr Tobinick, the doctor had asked whether New Zealand clinicians might be interested in learning the treatment.

Dr Tobinick had come in for harsh criticism from sceptics in the United States. However, he had helped hundreds of stroke survivors, and was not overpromising the treatment's potential, she said.

While firmer evidence for the treatment might be available in a few years' time, Mr Griffin could not afford to wait that long.

Mrs Griffin thanked her employer, Dunedin Taxis, whose support was critical to her being able to put so much effort into the rehabilitation.

He did not know enough to comment about etanercept, but the lack of rehabilitation in the community was a ''travesty''.

There was growing evidence stroke survivors continued to improve for much longer than first thought. They needed to be rehabilitated in the community long after hospital discharge, Mr Vivian said.