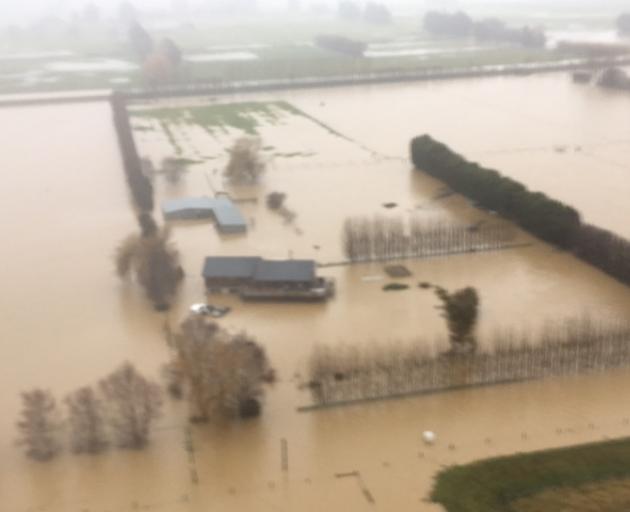 Dunedin police say a group of drunk flood rubberneckers were lucky not to be killed.

The group of six people had to be hauled out of floodwaters by a helicopter about 2.30am this morning, some of them so drunk they had to be carried from the chopper to a waiting ambulance.

Police said while the majority of residents were following advice of the authorities , the rescue was significant and concerned them.

About midnight, emergency services received numerous calls from a man who was sitting on his vehicle on State Highway 87 trapped in flood waters.

The man said he was with six men and women, aged in their twenties.

“Rescuers were required to carry out a rescue which, had those involved followed Civil Defence advice, would not have been required,” Inspector Kelvin Lloyd, of Dunedin, said.

“Initially rescuers were unable to reach the group in the atrocious conditions, so a rescue helicopter was required.

Water Rescue swimmers were tasked to assist due to the rapidly rising flood waters.

“All nine individuals appeared to be intoxicated and they were all suffering from hypothermia.

A number of them were in such an advanced state to the point where they need to be carried out.”

They were transferred to waiting ambulances before all rescuers had to evacuate the area immediately due to the rising water levels.

“Those rescued chose to ignore advice to stay off the roads and put themselves and the lives of several rescuers at risk,” says Inspector Lloyd.

“Without the assistance of these rescuers, we have no doubt that lives would have been lost.”

Police reminded all members of the public that venturing out in such conditions, contrary to emergency services warning, puts the lives of both the rescued and rescuers at serious risk, he said

“Rescuers and emergency services are here to help and will respond to issues as soon as possible, however everyone’s role becomes significantly more dangerous when advice is not followed.”