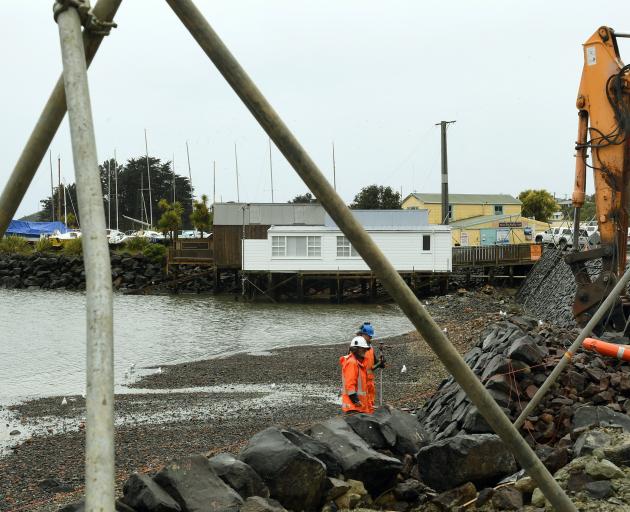 The Broad Bay Boating Club still has some issues with the new plan. PHOTO: STEPHEN JAQUIERY
A compromise has been made with the Broad Bay community after plans to widen the road and add a cycleway proved unfavourable.

Residents felt the original plans for the local section of Portobello Rd on Otago Peninsula, released in July, would ruin a local reserve and cause congestion around the local boat club.

The plan has since been revised following community meetings and consultation with the Dunedin City Council and road designers.

Broad Bay resident Simon Blake said the new design would result in the road cutting into only 1m of the reserve, rather than 3m.

It meant some native tress would no longer be removed and the road would not be brought as close to the man-made beach.

A barrier would also be built around a cycleway that would run through the reserve, which had raised safety concerns, particularly among local families who took young children to the beach, Mr Blake said.

"I am very happy with the beach area. I think that is a really good compromise."

But the new design had not eased all of Broad Bay Boating Club secretary Marty Brash’s concerns.

It would still mean less space at the front of the club, where it was already "tight on a good day" for those launching boats and manoeuvring cars, he said.

The club also had consent to rebuild within the next few years and limited space would pose many challenges for that development.

He was, however, pleased to see the car parks near the club that were removed in the first plan had been included and repositioned in the new plan after he consulted with the road designers.

"The changes made were small, but worthwhile," he said.

It meant an overall increase of four car parks near the boating club.

A bus stop had also been added at the intersection of Portobello Rd and Matariki St.

Otago Peninsula Community Board chairman Paul Pope said the community talked through the design changes during an on-site meeting at beginning of last month.

While there was more work to do, positive steps had been made.

"I think the community are a lot happier than where they were in July," he said.