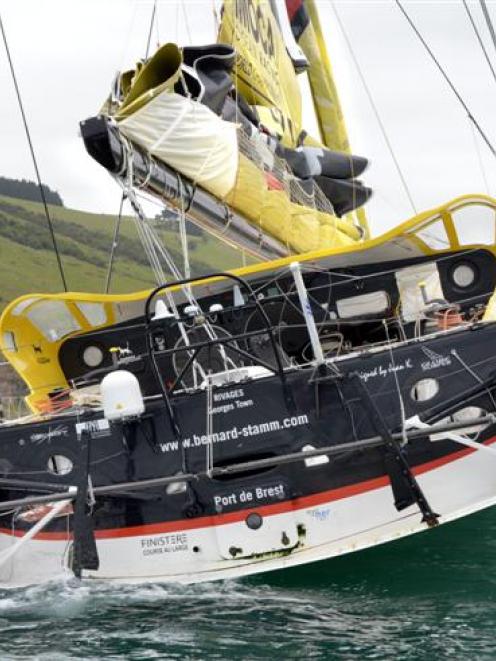 Swiss yachtsman Bernard Stamm stands on the stern of Cheminees Poujoulat off Murdering Beach, near Dunedin, waiting for the swell to subside so he can make repairs to his hydro-generator before returning to the Vendee Globe 2012 round-the-world yacht race.
A stricken yacht has anchored off the coast of Dunedin to make emergency repairs after being damaged during one of the world's most gruelling round-the-world solo yacht races.

Swiss sailor Bernard Stamm first attempted to make repairs to the hydro-generator and the central winch column on his yacht Cheminees Poujoulat in the Auckland Islands last week while racing towards Cape Horn, South America.

But finding a suitable place to anchor in a sheltered bay away from kelp beds and other seaweed proved too difficult.

So he headed for New Zealand, and anchored near Murdering Beach yesterday. The vessel's 19m-long, 6m-wide hull could not be sailed into Otago Harbour because it needs deep keel clearance.

Swiss yachtsman Bernard Stamm stands on the stern of Cheminees Poujoulat off Murdering Beach, near Dunedin, waiting for the swell to subside so he can make repairs to his hydro-generator before returning to the Vendee Globe 2012 round-the-world yacht race.
Mr Stamm was interviewed and photographed from a small boat yesterday afternoon after a friend emailed the Otago Daily Times about his plight. He said the long sail north was a major detour in his bid to win the Vendee Globe 2012 round-the-world yacht race.

Mr Stamm said he was leading the race when one of the brackets securing the hydro-generator on the hull failed.

The system uses motion through water to generate electricity, and without it, he does not have enough energy to power appliances such as lights, pumps, computers, navigation and automatic piloting equipment.

Mr Stamm said he was taking care to avoid physical contact with any other vessels for fear of breaking race rules, which state competitors will be disqualified if they receive help or equipment during the race.

While in the Auckland Islands, a Russian ship came alongside and offered fuel, but he rejected the offer because he was determined to continue the race.

He said it was a difficult choice, but he was guided by his ''sense of responsibility''.

Mr Stamm said he had been at sea since November 10, and at an average speed of 14 knots, he still had about 40 days to go before he crossed the finish line.

When asked if he had had a shower since his departure, he shook his head and pointed to the sea before making scrubbing motions.

He often dreamed of having a cold beer. He said: ''A beer would be nice now, but it would taste better at the end.''

Being at sea alone was lonely at times, but he was grateful he could communicate via his laptop with his wife and two children.

However, the damaged hydro-generator meant he has had to cut back on the amount of communication with his family.

He was looking forward to finishing the repairs so he could make contact with them more often.

He hoped to be back on the high seas some time today, he said.

Although Mr Stamm was only about halfway through the race, he said he was now more than 3500km behind the race leader and it was unlikely he could still win.

In his previous attempt at the Vendee Globe race, he had to retire due to damage, so this year's race was now more about getting to the finish, he said.