Rugby jersey red-carding 'an over reaction' 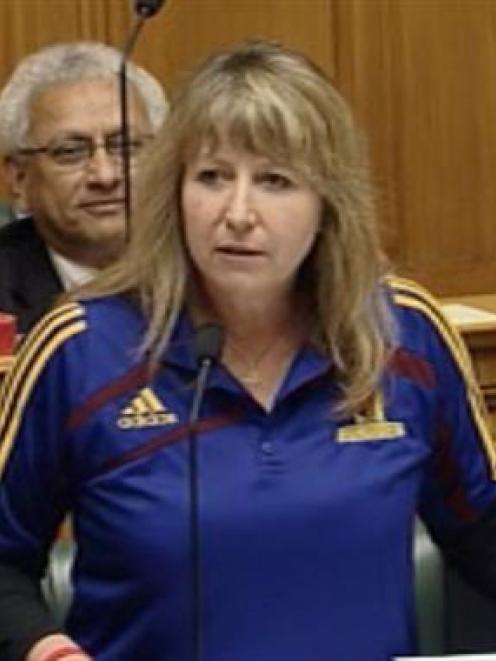 Ms Curran told the Otago Daily Times she had checked the dress standard for women MPs to enter the House and nowhere was there any mention of not being able to wear a rugby jersey.

She was critical that Dr Smith would not take points of order on the issue, including ones from Green Party co-leader Metiria Turei, also of Dunedin, and Labour MP Trevor Mallard.

"For goodness sake, this is an overreaction," Ms Curran said.

After she left the House, she could hear debate raging about whether or not she should have been allowed to remain.

Mrs Turei left the House under her own volition in support of Ms Curran. Mrs Turei later posted on Twitter: "Sexism in the House continues. Has [Labour MP] Ross Robertson ever been scolded for his sports team scarves, let alone kicked out? No".

Asked why she had worn the jersey, Ms Curran said the issue had become a major talking point for her constituents in South Dunedin last week when it was revealed the Highlanders would be adopting a new green strip.

"I started asking around why they were changing the the uniform and I started to feel quite angry. This has become a significant issue.

Rugby supporters in the South were committed to the team and its uniform and it should not be changed just for a PR branding exercise, she said.

Dr Smith told Ms Curran that if a male MP entered the debating chamber wearing a football or rugby top they would be asked to leave. In the interest of fairness, the rules should be consistent on either side.

He asked her to leave and return dressed appropriately, "should she wish".

"It's all I'm asking. It's not a big call. This House has certain dress standards," the Speaker said.

Ms Curran's removal from the chamber was supported by Mr Mallard, who said it was a step towards equality, NZPA reported.

"We've had in the past Ruth Richardson regularly in this House in a tracksuit, and that was something which was allowed because I think when the original rules were developed, it wasn't contemplated that there would be women members of Parliament."

He asked Dr Smith to look carefully at the issue of sports attire, given that some MPs wore ties and badges supporting sports teams.

Dr Smith said he had no objection to that but asked MPs to exercise discretion.

He said the standards had been updated since Ms Richardson was an MP, and women were now expected to wear business attire.