The rules are clear; now it's up to drivers 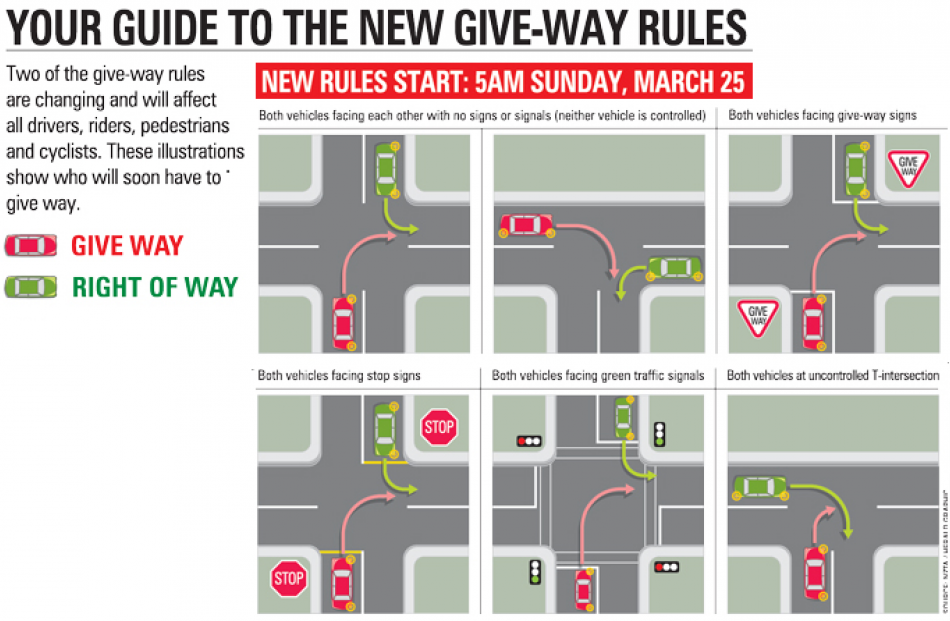 Crashes at intersections will be inevitable tomorrow, but they will not necessarily be attributable to the new give-way rules, the New Zealand Transport Agency says.

The agency has reminded road users to take the time to brush up on the two new rules before they head out on the road tomorrow.

From 5am, vehicles turning right will have to give way to vehicles from the opposite direction turning left.

Drivers at the bottom of T-intersections will give way to all traffic turning off the main road.

The changes were simple, agency chief executive Geoff Dangerfield said yesterday, but people needed to take responsibility for ensuring they knew them.

"There are plenty of good tools available, and we're urging people to take advantage of them and to spend a few minutes to review the new rules this weekend.

"Our message for Sunday and beyond is simple - a little extra patience, caution and courtesy at intersections will go a long way."

Information on the two new rules and resources to help people learn them are available at www.giveway.govt.nz.

This includes an interactive quiz, a computer "drive through" animation illustrating how the two new rules will work, the TV advertisements, and resources in multiple languages.

Agency spokesman Andy Knackstedt said crashes tomorrow would be inevitable, although not necessarily attributable to the new rules.

NZTA's statistics showed, on average, there were two intersection crashes on Otago roads each day.

Dunedin city was ranked at the top of the agency's list for urban intersection crashes causing either fatal or serious injuries during the five years from 2006 to 2010.

There were an average of 16,250 crashes reported at intersections on New Zealand roads every year.

The agency was confident that, eventually, the new rules would reduce confusion and crashes at intersections.

Over the long term, it expected the new give-way rules to reduce relevant intersection crashes by about 7%, preventing about 100 injuries and one fatality each year.

"We are urging people to use extra patience, caution and courtesy at intersections on Sunday and next week. If someone else makes a mistake, give them a friendly wave.

"Ultimately, what happens on Sunday will depend on drivers themselves. There is plenty of information available; now people need to take the initiative to avail themselves of it."