Sale of designer threads to help work of refuge 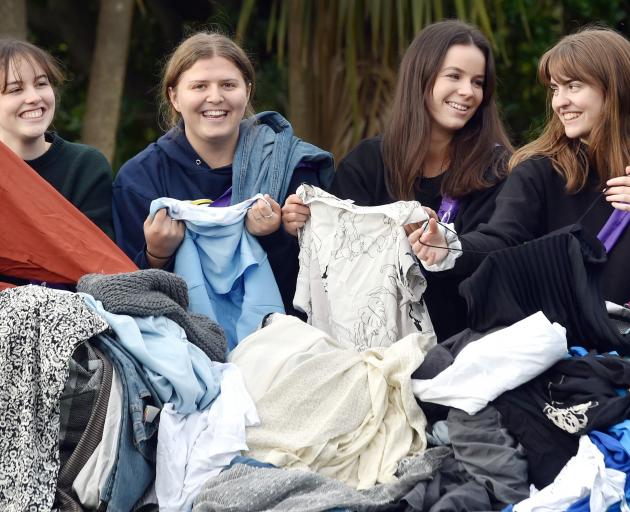 Te Whare Pounamu Women’s Refuge Appeals Week committee members (from left) Carrie Wooller (22), Maaike van Eeden (21), Georgia Thompson (21) and Caccia Armstrong (22) sort fashion labels ahead of their designer clothing fundraising sale at Petridish today. PHOTO: PETER MCINTOSH
There is such a thing as too much of a good thing.

But after holding a charity gig, an auction, a quiz night and baking thousands of biscuits, cakes and squares over the past month, Carrie Wooller and her team of Te Whare Pounamu Women’s Refuge Appeals Week volunteers are not in the least bit sick of fundraising ... yet.

She and fellow committee members have already raised more than $28,000 for the Dunedin Women’s Refuge, and now they are hoping to boost their funds to more than $40,000 by holding a fashion designer clothing sale at Petridish in Stafford St, from 10am today.

The money raised would help support services, and boost the levels of non-perishable food items and warm winter clothing for the families that Dunedin Women’s Refuge worked with.

She said one in three women experienced some form of violence in their lifetime, and that number illustrated the vital role Women’s Refuge played in society.

‘‘The fact that many survivors are silently living through this reality places extreme importance on our campaign.

‘‘Every little bit helps, and we are extremely proud to be able to be part of a positive impact.’’

Miss Wooller said she was overwhelmed by the level of support the appeal had received, particularly from University of Otago students, as the volunteers worked towards securing a record amount for the refuge.

‘‘The events we have already run have been very student-orientated, particularly our Charity Gig which featured local talent.

‘‘It was amazing to see so much of the wider student community coming along to support Women’s Refuge, and we had great feedback.’’

This was the seventh year Te Whare Pounamu Women’s Refuge Appeals Week had run an appeal, and had raised hundreds of thousands of dollars for the charity, she said.