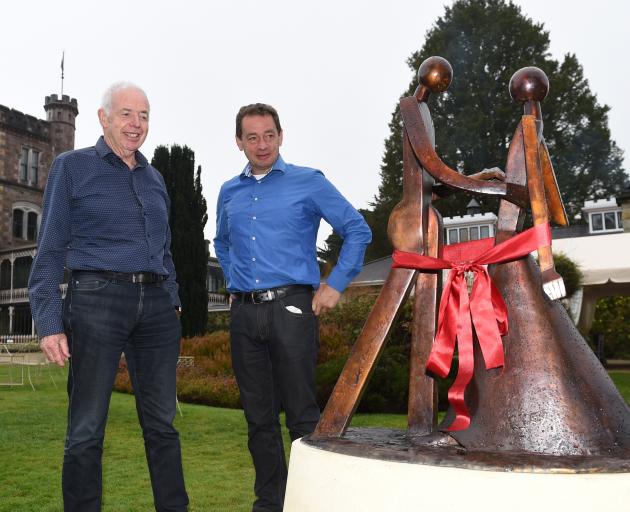 Sir Eion Edgar (left), organiser of the first Larnach Castle ball, and castle director Norcombe Barker admire a new Paul Dibble sculpture commissioned to mark the 50th anniversary of balls at the peninsula landmark. PHOTO: GREGOR RICHARDSON
Half a century of elegance and entertainment at Larnach Castle balls has been marked with a stylish new addition to the castle's lawn.

A sculpture by noted artist Paul Dibble, the man who created the New Zealand war memorial Southern Stand for Hyde Park in London, depicts a couple in mid-dance.

"We wanted a work with a connection to the university because the first ball was organised by students and I don't know how many student balls and events we have had here over the years," castle director Norcombe Barker said.

"Paul Dibble has a work outside the staff club at the university, so that brings through that connection."

Mr Barker was reviewing the footage three years ago, and was inspired to try to mark the occasion's 50th anniversary.

Convincing castle chairman Geoff Thomas, who had attended the original ball, was not difficult.

Sir Eion Edgar, who was one of three University of Otago students who masterminded the 1967 event, was also enthusiastic.

About 50 people who were at the original ball were reunited for the 2017 event, which the modern-day organisers decided to commemorate with Mr Dibble's commissioned work.

The sculpture was unveiled on Saturday by Sir Eion, accompanied by University of Otago vice-chancellor of humanities Helen Nicholson.