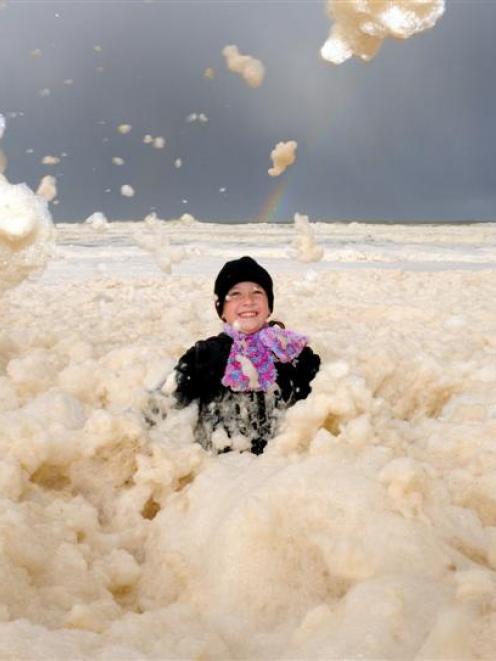 A visit to grandmother Hazel Murtagh's Kuri Beach home yesterday turned into a frolic deep in the sea foam for Polly Nyman (10), of Lawrence. Photo by Stephen Jaquiery.
The Brighton coast resembled a giant fluffy milkshake yesterday, with the beach and foreshore blanketed in a thick milky foam.

The foam, which was about 1m deep in places and 200m wide, stretched for several kilometres along the coast south of Dunedin in a phenomenon not seen at the beach for many years.

All were churned up together by powerful currents, which caused the water to form bubbles. The bubbles floated up through the moving water and massed together to become foam.

Sand and sediment also got caught up, giving the foam a slightly dirty appearance.

Mr Turner said it was a relatively common natural phenomenon around New Zealand coasts that normally appeared as a shallow brown scum.

This week's storms and a strong easterly wind yesterday had probably churned the surf so much and blown it in the direction of the beach, causing an unusual amount of the foam.

Kuri Beach resident Hazel Murtagh said she had seen similar amounts of foam before, but not for many years.

The city council's website says scum samples had been tested for faecal contamination in the past. The tests usually showed very low concentrations of bacteria.