By Hamish MacLean
6 Comments
A Dunedin business is defending its actions after angry beach-goers accused it of endangering a threatened New Zealand sea lion and its pup as it worked on a city beach yesterday. 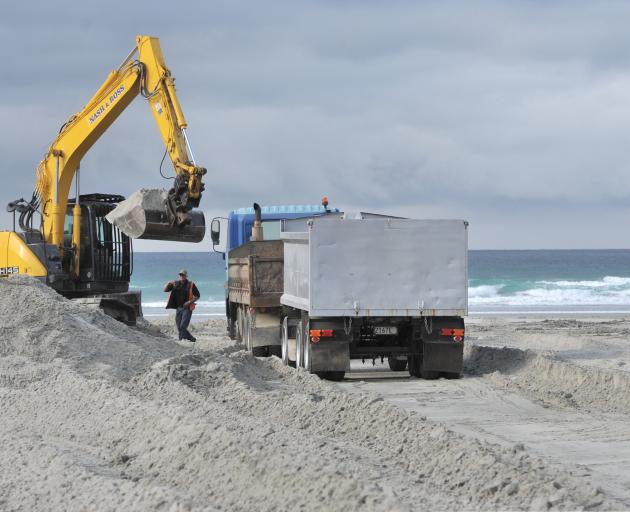 Contractors were criticised by beach-goers yesterday as they removed sand from Tomahawk Beach amid claims a mother sea lion was separated from her pup. PHOTO: LINDA ROBERTSON
By 9.15am, members of the public had called both the Department of Conservation and police.

Others were drawn to the beach after a heated exchange between Nash & Ross workers and members of the public.

The consent for the work he held did not refer to wildlife, but referred to public safety along with a host of other conditions, all of which were met, he said.

"The members of the public were acting illegally.

"We’ll have the police there next time they try something stupid like that," Mr Ross said.

"I’ve got as much time for wildlife as anybody, but what they were doing was absolutely bloody ridiculous."

The beach was sited off a sewage outlet, and there was a toxic algal bloom in the estuary signposted on the beach that would have been more of a risk to the marine mammal, he said.

Several members of the public described hearing howls of a sea lion over the noise of heavy machinery.

None reported seeing the pup.

Kim Gotlieb, who lives near the beach, said she was "over it".

"It’s abhorrent that the extraction of sand has priority over the protection of wildlife," she said

"This whole incident has been really upsetting, to the sea lions first and foremost, and to the locals," Miss Whyte said.

The sea lion and pup were believed to be the pair that forced the closure of John Wilson Ocean Dr last month, she said.

Police did not attend the incident yesterday, a police spokeswoman confirmed.

A mother and pup are known to be residing in the area, Ms Wallace said.

At this stage in the breeding season, the pups were getting older, and mothers did leave them on their own while they foraged at sea, she said.

The council and company were working together to install signage that outlined the purpose of the consents and their conditions.

The council was notified the work would go ahead yesterday on Wednesday, she said.

Wildlife aside ... people sometimes comment on where all the sand has gone from St Clair, Middle and St Kilda beaches. I'm not 100% sure, but I believe there was a study done on the effects of removing sand from Tomahawk beach, basically, tide and sea currents replenish the sand at Tomahawk beach by eroding the sand from the 3 other beaches.

Maybe the DCC / ORC should dig that report out and have a closer look at it, rather than spend millions on developing a plan of what our beaches will be like in 100 years. Like any other natural resource, some people just don't get that by taking it, it can have major long term detremental effects.

I'd certainly like to know how much sand is being taken each year, what the comapany is paying for it, and how much it's selling it for ... of course that will be "commercially sensitive" information and probably require requesting it under the OIA to uncover it.

Think smarter councillors and start asking the questions that matter ... you don't have to spend millions of ratepayers money to find the answers.

Agreed, leave the sand there!

Typical of the ORC. They continue to prioritise business and economics over nature and the environment.

Seal Lions are a threatened species so why did DCC, ORC and DOC agree to this work being carried out during the breeding season?

Bad decisions made by whoever allowed the company on the beach. Dog owners and public advised to stay away. But business gets a free pass to do damage. Profit wins, environment loses.
Give the endangered wildlife space and safety.
Stop stealing sand from the beaches and degrading the habitat. As mentioned by Concerned: taking natural resources causes significant effects. Short-term private profit and gain for a few. Long-term pain and loss for the environment and public.

The sand dunes at Tomahawk have retreated by about 1 metre a year. It's really quite simple to see this using Google Earth historical imagery. Laughably people with "local knowledge" have disputed this with me in the past.