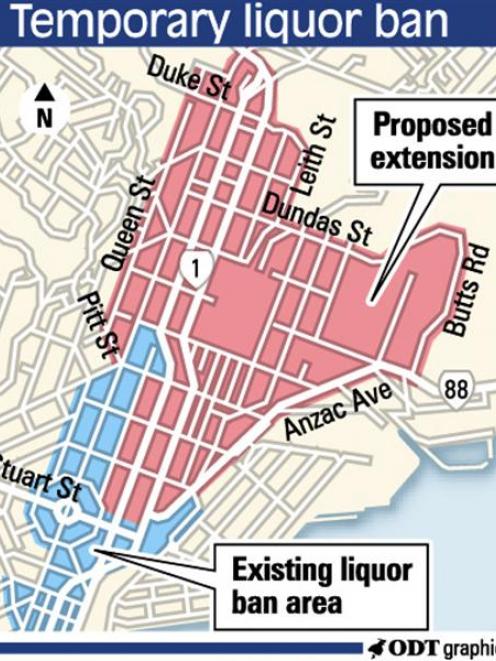 The concerns have been relayed to the Dunedin City Council in a letter from Dunedin police, along with a request for a temporary North Dunedin liquor ban from June 18-20.

Gardens Tavern spokesman Mark Jordon told the Otago Daily Times yesterday he was "worried as well", and extra staff - including security - would be on hand to deal with the expected crowds.

"If that happens, if it [degenerates] into an Undie 500-style event, we will shut it down.

The concern stems from the fact the All Blacks v Wales rugby test match will be staged in Dunedin on June 19, the same night the "Gardies" student pub in North Dunedin is due to shut its doors for the final time.

Police expect a crowd of up to 1500 people to be drawn to the pub, surrounding streets and flat parties in the area.

In a letter to the council proposing a temporary North Dunedin liquor ban, Dunedin/Clutha area commander Inspector Dave Campbell, of Dunedin, warned with international media in the city for the rugby, there was a "real risk of major disorder and resulting adverse publicity".

"The possibility for serious disorder exists if people stand around drinking alcohol on the streets, as has clearly been seen with previous student events such as the Undie 500," he said.

Cr Bezett said the city had been "let down many times" by students and others involved in the Undie 500 trouble, and he supported a liquor ban.

"It has the potential to really cut loose. I think we should err on the side of caution. It's a case of once bitten, twice shy."

Insp Campbell said the crowd size could be fuelled by the pub's "iconic" status among past and present University of Otago students throughout New Zealand.

On the internet, one Facebook page dedicated to the pub boasted more than 2000 members, and included suggestions for ways students could "rent out their rooms to the masses coming down for the last hurrah".

Another site urged more than 2000 "confirmed guests" to "put your liver into preparation, chase everyone up, book your flights and accommodation and let's get this party started".

"We should all be flocking back in droves ... There's also an All Blacks test on that weekend at Carisbrook which is more of a reason to come down and go wild."

Insp Dickie said police were preparing for "any eventuality".

"We have learned from past experiences and feel we do need to have a reasonable amount of resources available to cover anything that may occur."

Insp Campbell's letter and the liquor ban would be discussed at Monday's full council meeting.

Nobody from the University of Otago was prepared to comment yesterday.