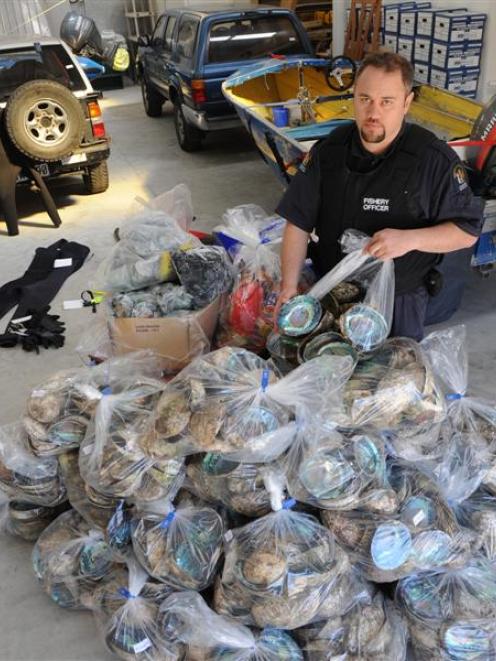 For six months, ministry officers have been monitoring a group allegedly harvesting large quantities of paua illegally from the coast north of Tomahawk Beach on Otago Peninsula.

Ministry field operations manager Murray Pridham said there was strong information to suggest the paua was then being sold illegally to fish shops in Dunedin.

"For our area, this was very organised, serious, high-level stuff."

About 13 fisheries staff, including one from Invercargill and one from Canterbury, and nine Dunedin police officers were involved in an operation to shut down the group.

An aluminium dinghy, 1500 paua shells at a residence, an outboard motor and two vehicles were seized in the operation, and about 285 paua believed to have been sold by the group had been recovered from various locations around Dunedin, Mr Pridham said.

"They have been working completely outside the system for financial gain."

The size, up to 160mm-plus (125mm is the legal size), and shape of the recovered paua shells indicated they were taken from the one area where the group was believed to have been diving, he said.

It was an area closed to commercial fishing.

The poaching would have damaged the fishery, which also supplemented other paua beds along the coast, he said.

Twenty people had been interviewed and inquiries were continuing.

"It is very likely that the ringleaders will face prosecution."

The maximum penalty was up to five years in prison or a fine of up to $250,000, with property used in the commission of the offence forfeited, upon conviction.

Non-commercial fishers were not permitted to sell or trade their catch and were subject to strict limits on how much they could catch, along with many other controls, Mr Pridham said.

However, large quantities of cheap, black-market seafood were often sold illegally by poachers to workplaces, clubs, hotels and restaurants.

"It is stolen from, and undermines our natural resources, by poachers whose indiscriminate activities should be noted and reported," Mr Pridham said.

Catches:
Recent paua poaching discovered by the Ministry of Fisheries. -