By Brenda Harwood
0 Comments
The impact of a noisy world on the hearing of tens of thousands of New Zealanders was highlighted during a ‘‘Silent Breakfast’’ hosted by Hearing Support Otago.

Held at Nichol’s Garden Cafe in South Dunedin on Monday, the breakfast launched Hearing Awareness Week, which focuses on the impact of headphone use among young people and has the theme ‘‘make listening safe’’.

Hearing Support Otago president Olwyn Grey told the gathering that an estimated 900,000 New Zealanders were living with hearing loss, which was a ‘‘silent and growing epidemic’’.

‘‘I urge you all to be passionate about protecting your hearing,’’ she said. 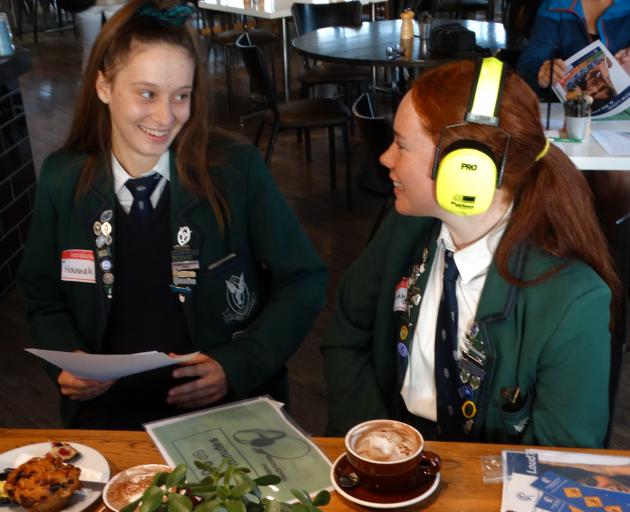 Columba College prefects Hannah Clarke (17, at left) and Isobel Fraser (16) try to communicate with hearing restriction from headphones during the Hearing Support Otago ‘‘Silent Breakfast’’ on Monday. PHOTO: BRENDA HARWOOD
To illustrate the challenges facing people with hearing loss, breakfast guests donned noise-cancelling headphones and attempted a series of exercises, including trying to hold a conversation, and trying to accurately identify similar-sounding consonants and vowels.

‘‘It was really quite hard to tell the difference between a lot of words and consonants - it is definitely something to think about,’’ Hannah said.

Talking to media later, Dunedin City Councillor Lee Vandervis recalled his earlier life using circular saws, as a sound engineer and as a young man going to ‘‘far too many loud rock concerts’’.

‘‘My message to everybody is do not use [a circular saw] without ear protection, and don’t go to rock concerts and sit up the front without earplugs,’’ Mr Vandervis said.

‘‘Because 20, 30, 40 years later will pay a terrible price for neglecting the sensitivity [in your ears].’’

‘‘The group of young people I see most often are first and second-year university and polytechnic students - who have suddenly realised that they are missing a lot in lectures,’’ Mr Gaskill said.

Young ‘‘tradies’’ were also among those who came looking for help with their hearing, after experiencing progressive hearing loss, and also some hunters with hearing damage from firearms.

‘‘Hearing loss is an invisible disability, so raising awareness is important,’’ he said.

To book a free appointment call 0800 008-011, or complete an online form at www.lifeunlimited.net.nz