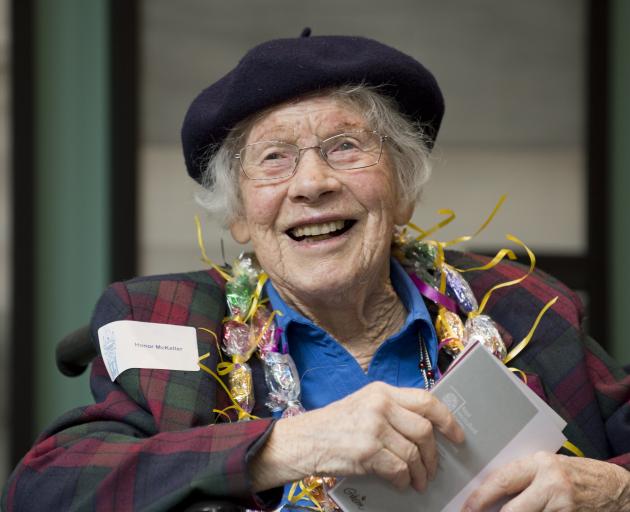 She was honoured as a former New Zealand mezzo-soprano opera singer, as the university’s first executant lecturer in voice (1970-85) and for her overall influence on New Zealand music.

She has long played a key role in the Dunedin Performing Arts Competitions Society and its senior vocal festival.

In a prerecorded video link, Lemalu paid tribute to Miss McKellar as a very professional singer and teacher who had helped him to focus, and improve himself.

Former pupil Jonathan Lemalu sings Happy Birthday to Miss McKellar in a pre-recorded video message during the reception.
He was ‘‘sending lots of love to you, my musical mother, happy birthday,’’ he said.

She was one of the original singers in the widely touring New Zealand Opera Company, established in the 1950s.

She had studied at the Royal Academy of Music in London and briefly been a part of Opera For All — a scheme similar to the NZ Opera Company operating in the UK.

She received a QSM in 1989, for services to music.

In 2012, she was honoured by her peers and made a life member of the New Zealand Association of Teachers of Singing.

She was nominated by Dunedin singing teacher Pat Scally-Richardson, who described her as ‘‘the ‘grande dame’ of singing in the South’’.