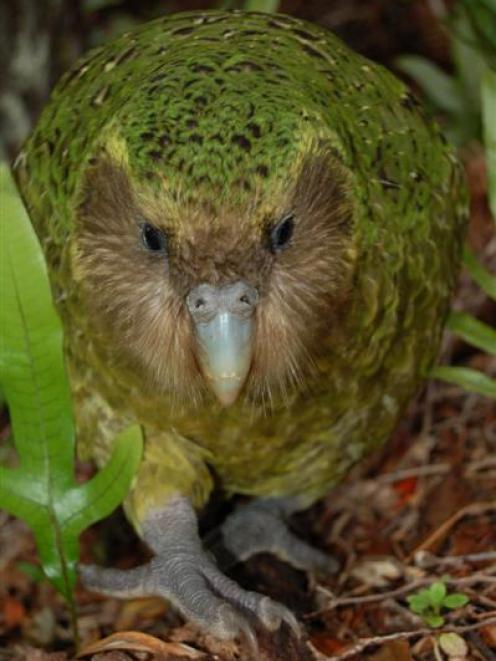 Sirocco will visit the sanctuary next month. Photo: Doc
New Zealand's mischievous spokesbird will make its first public appearance in four years in Dunedin next month.

Sirocco the kakapo will visit the Orokonui Ecosanctuary from September 9 to 29, during which time the facility will offer $50 night tours.

Part of the funds will go towards the kakapo conservation effort.

The 21-year-old rare flightless parrot flew to fame in 2009 when it attempted to mate with the head of one of comedian Stephen Fry's film crew on Codfish Island.

Orokonui Ecosanctuary general manager Amanda Symon said Sirocco's purpose-built quarters at the facility had been "dusted off'' in preparation for his arrival.

The ecosanctuary has hosted the bird twice before, most recently in 2014.

"It's really good for advocacy. It gives the general public a greater sense of engagement if they actually meet a kakapo.''

Sirocco was an especially good ambassador for the species as he was "extremely charismatic''.

The bird required special attention and particular foods, she said.

"A lot of work goes into making sure he's looked after.''

It was a "once in a lifetime'' opportunity for the public to see one of the 149 birds, which largely live on remote islands.

Department of Conservation threatened species ambassador Nicola Toki said with the summer shaping up to be the biggest kakapo breeding season on record, the department hoped to soon be facing the "happy problem'' of having more of the species than it had sites for.

"While we love having Sirocco as our spokesbird, our ultimate goal is to one day have kakapo roaming the landscape freely.''

The Predator Free 2050 goal was important in order to achieve this, she said.

Sirocco was hand-reared by department rangers as a chick because of a respiratory illness.

He went "off grid'' in Fiordland for two years in 2016 after his transmitter failed before being found this year after a concerted effort.

The department says this will be his only public appearance until at least 2020.