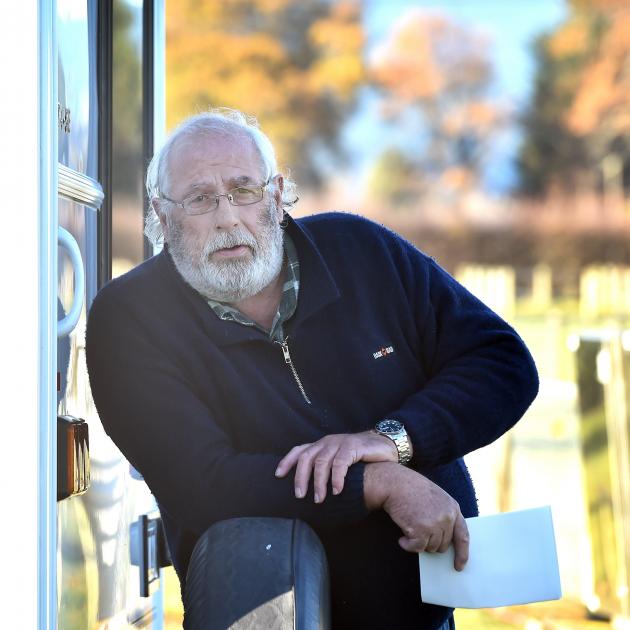 Former Southern Taxis driver Gary Powell stands outside his caravan parked in Mosgiel. PHOTO: PETER MCINTOSH
A Dunedin taxi driver who says he lost everything during a six-year legal battle with his former employers has finally received the unpaid wages he was owed.

And he hopes it will improve the industry for others.

The Employment Relations Authority (ERA) determined they were employees and were owed unpaid entitlements, such as minimum wages, holidays, rest breaks and unlawful deductions.

Their former employers had spent two years trying to argue they were contractors.

However, since then, the drivers have been fighting for their money after the company’s former owners Ron and Maureen Grant appealed the decisions all the way to the Court of Appeal.

The case was settled after the death of Mr Grant.

Mr Powell, who is living in a caravan in Mosgiel, said he lost everything during the long legal battle, including his marriage.

He was pleased to finally have been paid out, but said it had been a long time coming.

When he started in the taxi industry in 2006, it was common for drivers to work 70 hours a week and only collect $250 in the hand.

Mr Powell hoped the case would be used as an example to improve conditions for taxi drivers.

The legal battle had cost Mr Powell a "fortune" in lost earnings, he said, because of the time it took to get the "bloody job done".

Taxi drivers should been entitled to be on full wages as employees — "it’s just what is right," he said.

"I just hope others look at this and learn from it," he said.

Mr Powell said they had accepted a smaller amount than what was in the original ERA ruling, but declined to say how much it was.

If they had not settled, it could have taken many more years to get it a resolution, he said.

On December 20 last year, the Court of Appeal sent the case back to the Employment Court.

The court ruled if the directors knew the conditions the drivers worked under that meant it was not relevant whether the directors believed they were contractors rather than employees.

However, before the case was heard again, Labour Inspectorate southern manager Jeanie Borsboom said this week the drivers had been paid out.

The Otago Daily Times understands Mr Kennedy was the only driver not to receive a pay out because he died in January before the case was settled.

Ms Powell and Mrs Grant could not be reached for comment.

Employee: A person employed to do any work for hire or reward under a contract of services (commonly called an employment agreement). This includes people working in a triangular employment situation.

Contractor: A person  engaged by a principal (the other party) to perform services under a contract for services (commonly called an independent contractor agreement). Contractors are self-employed and earn income by invoicing the principal for their services. A contractor pays their own tax and ACC levies.