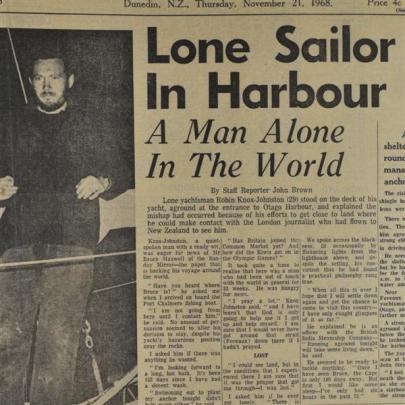 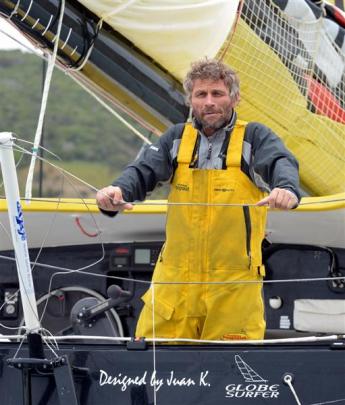 A solo round-the-world sailor is off and racing again after completing repairs off the Dunedin coast.

His stopover stirred memories of another intrepid adventurer's visit nearly 45 years ago.

English sailor Robin Knox-Johnston was at the time vying with five others to become the first person to sail alone and non-stop around the world.

He achieved the feat and went on to have a glittering sailing career, including being named international sailor of the year - together with New Zealand's Sir Peter Blake - in 2004.

Five months after setting sail from Falmouth, England, on his solo bid, Sir Robin found himself aground near the entrance to Otago Harbour, in a cove just below Taiaroa Head.

He had been attempting to pass close by Dunedin to get a message ashore that he was safe, after surviving bad weather in Foveaux Strait, he later said.

Lacking charts and sleep, he instead ran aground and was forced to wait for high tide to float clear.

While waiting, Sir Robin was greeted by fisherman and journalists from the Otago Daily Times, aboard a small runabout, who interviewed and photographed him from close by.

He was said to be in ''good spirits ... moving about the deck attired in no more than a pair of bathing trunks, singing and laughing'', ODT reporter Ian Parata wrote.

''A cold wind, approaching darkness and the fact that he was aground did not seem to worry him, although he did change into warmer clothing once he realised the hopelessness of his position.''

Mr Irvine - a 19-year-old ODT cadet at the time - recalled Sir Robin's arrival caused a stir in Dunedin, while the story's accompanying pictures were sold internationally.

''It was very uncommon.

''For him [Sir Robin] to turn up on Dunedin's doorstep, it created quite a buzz around the place.''

''It's almost the same area ... history repeats itself, doesn't it?''After a five-hour stopover, Sir Robin sailed on, headed for Cape Horn and, eventually, line honours back in England.

None of his five rivals finished the race.

One, Bernard Moitessier, withdrew after also rounding Cape Horn and instead sailed on to Tahiti.

Another, Donald Crowhurst, died after jumping from his yacht into the sea, and was later found to have faked much of his participation.