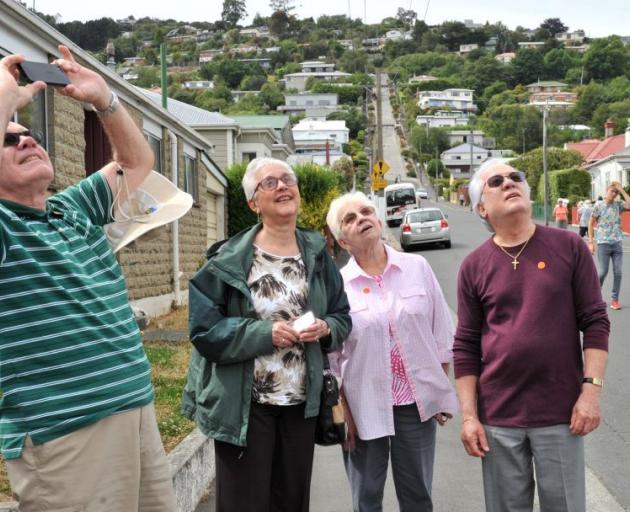 Celebrity Solstice passengers (from left) William and Marguerite Moody, Lucille and Jackie Fraser, all of Florida, photograph signs in Baldwin St on Saturday. Photo by Linda Robertson.
''Wonderful'' weather and the attractions of Dunedin combined to produce a perfect start to the cruise ship season.

Dunedin City Council business development adviser Sophie Barker said it was difficult to quantify the benefits of the cruise ship season to Dunedin so far, but larger ships, such as Celebrity Solstice which visited on Saturday, were worth more than six-figure sums to the local economy.

''It's been really positive and hasn't the weather been amazing? That affects how people feel and how much they spend,'' Ms Barker said, of the start of the season.

''We have had one ship come in early and several overnight stays.

The weather gods again smiled on the city as passengers from Celebrity Solstice enjoyed the sights in perfect conditions.

The temperature reached 23degC by about 10am and clear skies and little wind greeted those venturing from tour buses.

''It's fantastic given that last year we had three weeks of rain at this time of year,'' Ms Barker said.

''This is similar to Sweden's climate in summer,'' Mr Karlsson said.

Mrs Karlsson said the people in the city also made her feel at home.

''They are very nice people, very friendly,'' she said.

Celebrity Solstice berthed at the Beach St wharf in Port Chalmers about 6.30am on Saturday.

The 2850-passenger capacity ship sailed in the late afternoon.

Also on board were Florida residents William and Marguerite Moody and Lucille and Jackie Fraser.

''It's just an absolutely fabulous country. We are so impressed by everything we have seen so far.''

Mr Moody added: ''If I never returned to Florida I would still be happy''.

The group visited Baldwin St and were amazed by its height and gradient.

''In Florida, this would be the highest point in the state,'' Mr Moody said.

They were looking forward to finding out what else the ''marvellous'' city had to offer.