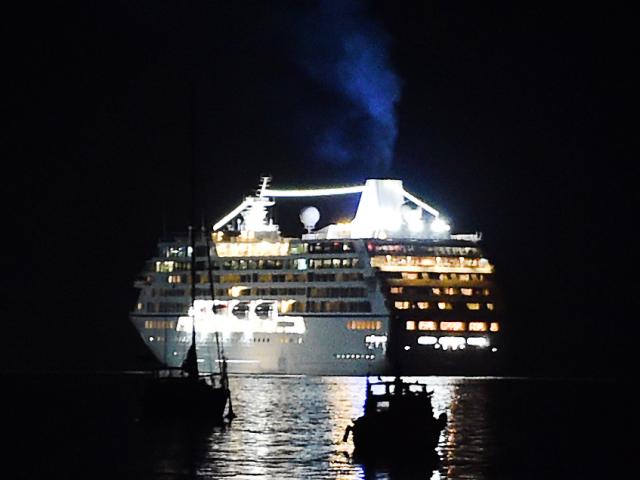 The departure from Dunedin of the cruise ship Sirena signals the end of the most weather-disrupted season on record.
The majority of food outlets will be closed on Christmas Day, despite the scheduled arrival of cruise ship Diamond Princess.

A tour of Dunedin came to a grinding halt for a group of cruise ship tourists after their bus ran aground at the weekend.

The cancellation of Dunedin's first cruise ship of the season has disappointed tour operators, and hit them hard in the pocket. The Diamond Princess was to have been the first of...

Dunedin hosted about 131,000 cruise ship passengers and 58,000 crew in a season the Dunedin City Council says earned the city close to $30 million.

''Wonderful'' weather and the attractions of Dunedin combined to produce a perfect start to the cruise ship season.
Thousands of cruise ship passengers flocked into central Dunedin yesterday during the busiest day of the city's latest cruise season.

Dunedin needs to do more to welcome cruise ship passengers to secure an industry now worth $38 million a year to Otago, a new action plan suggests.

There are mixed feelings among Dunedin retailers about this year's cruise ship season.

A complaint about new cruise-ship protocols at Port Otago is being assessed by the Commerce Commission.

Cruise ship passengers avoiding what they say are overpriced shuttles to Dunedin city visited Port Chalmers instead yesterday, despite suggestions from cruise ship staff to bypass the town.

Dunedin should implement a model for cruise ship tour operators established in Christchurch, an Akaroa operator says.
The cruise ship Seven Seas Voyager is scheduled to arrive at Port Chalmers this morning, and Diamond Princess is expected there tomorrow morning.

Further unrest among Dunedin tour operators about new cruise ship protocols, including claims of bribery and bias, will be addressed at a season-end debriefing.

It is the high life on the high seas.

The hospitality industry has been encouraged to do more research and be ''as prepared as they can'' for cruise ship visits as some Dunedin businesses start to fret at the demand from a ''frightening'' number of cruise ship customers coming past their counters.

Visits by two large cruise ships, container vessels and a logging ship contributed to a busy weekend at Port Otago.

Australians are expected to dominate the cruise-ship season.

Dunedin will receive the lion's share of the $32 million expected to be generated in Otago by the coming cruise-ship season.

Despite a drop in the number of cruise ships expected to visit Dunedin in the 2013-14 season, local tourist operators have been told to expect a 6.2% rise in passenger numbers.