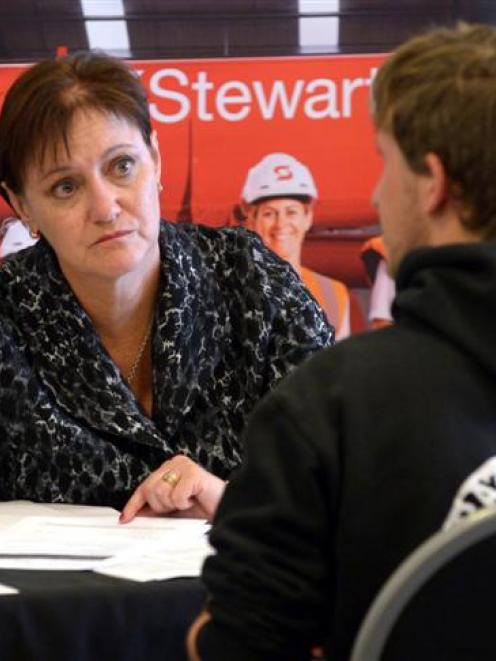 But many Dunedin job-seekers willing to commute up to an hour for work had an ocean of job opportunities to navigate, with the bulk of those jobs at Silver Fern Farms' (SFF) Finegand meat-processing plant near Balclutha.

There were between 200 and 300 vacancies at the plant as it expanded its production capacity, SFF human resources manager Tenielle Bray said yesterday.

If production increased further, as hoped, 350 vacancies could need filling at the plant in the coming months, she said.

The bulk of the rest of the jobs on offer were also within an hour's drive of Dunedin and included roles in the primary industry, construction, trade, support services and consulting sectors.

The job fair's goal was to marry Dunedin's population base with the Clutha-based job vacancies without stripping Dunedin of its people, Clutha Mayor Bryan Cadogan said.

Many of the available jobs were highly paid, he said, and included roles for people without any specific skills or qualifications.

SFF meat-processing jobs would come with all the training needed, Miss Bray said. The main qualities the company was seeking were reliability, honesty and the desire to work hard.

Within an hour of yesterday's job fair starting, Miss Bray said she had already interviewed ''a couple of really good candidates that I could see Finegand getting on board''.

The company ran buses between the plant and Dunedin daily, making the commute an easy option for prospective employees.

Filling jobs was an ongoing issue for the company, human resources adviser Karen Bilbie said, despite the jobs being well-paid, ''especially in relation to Dunedin''.

Calder Stewart also ran shuttle services to Dunedin for its staff, she said.

Dunedin job-seeker Saju Baby said the event was a perfect chance for him to meet prospective employers.

He had recently arrived in Dunedin from India with his family and said it had been difficult to gain the engineering work he sought.

The fact his work experience had been in India had proven a barrier, he said, but at the job fair the employers were seated across the table from him and could hear him out.

Fellow jobseeker Jamie VanToor sat down with several employers at the fair and liked the ''speed-dating'' idea.

''It's good because it means they're actually willing to come to Dunedin and give a whole day of their time.

''It's a lot harder if you see the ad in the paper and give them a call - it's only over the phone. This allows people to present themselves far better, and to show their attitude.''

Travelling out of Dunedin for work was no issue, he said.

''Definitely I'd travel for work if it means having a job. There's no point in sitting at home.''

Mr Cadogan said there was no plan B for filling the jobs. He did not plan to cast the net further afield.

''I'm hoping not. The underlying hope is that people in Dunedin get a break, get a job for life.

''We've got the jobs, we don't have the people. Dunedin has the people. Let's put the two together.''

The speed-dating format was putting the people needing jobs in the face of those offering them.

It was hoped it would solve the ''Rubik's cube'' situation where matching available jobs to available workers had not worked in the past, he said.

''So why make that Rubik's cube too difficult? This is just, I want a job, you've got one, let's sit across the table.''

With the strong turnout, it was likely the job fair would be repeated ''in some iteration'' in the future, Mr Cadogan said.craig.borley@odt.co.nz