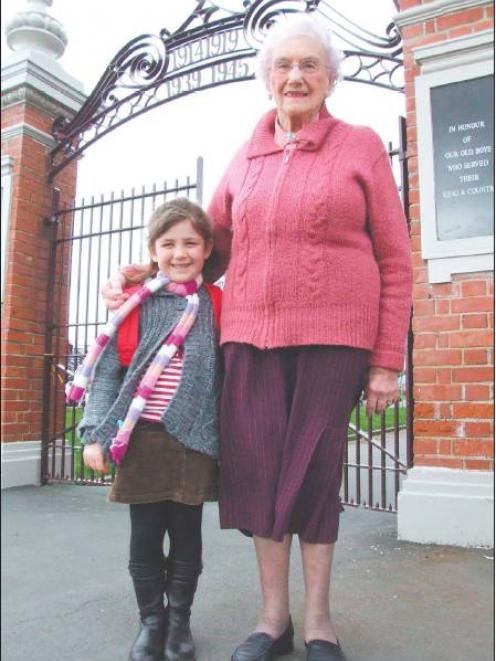 ‘‘I enrolled the year before but there was a polio epidemic, so I didn't begin school until I was six,'' Mrs Howison said.

‘‘I loved the school. We had marvellous teachers.''

Mrs Howison attended St Clair school with her brother Bill but she and husband Ronald moved to Central Otago in the 1940s. None of her four children, eight grandchildren or seven greatgrandchildren were pupils at the school, until now. Tomorrow, on 08.08.08, Abbey turns five and, on Monday, she goes to school.

‘‘I hope she will be as happy and learn as much as I did - learn to be a good citizen.''

Mrs Howison recalled the school's memorial gates and wooden gymnasium but said everything else appeared to have changed.

Her teacher in that first year was a Miss Bagley.

‘‘We were learning to read and I remember she got angry because I couldn't say ‘put'.

‘‘Every Friday we were given a boiled sweet and allowed to go home early.''

Home was just around the corner in Forbury Cres.

‘‘I used to go home for lunch.

‘‘Mothers were all at home, so most of the children went home for lunch.''

Abbey's parents returned to the neighbourhood a few years ago. So the five-year-old was likely to walk to and from school, her mother Sheryl Howison said.

Abbey knows her ABC, can count higher than 20 and is looking forward to starting school ‘‘because it's fun'', she said.

‘‘Being part of the school family is still really important,'' Mr Newton said.

‘‘But, increasingly, schools are individualising the learning to fit the child, rather than the child being shaped to fit the programme.''