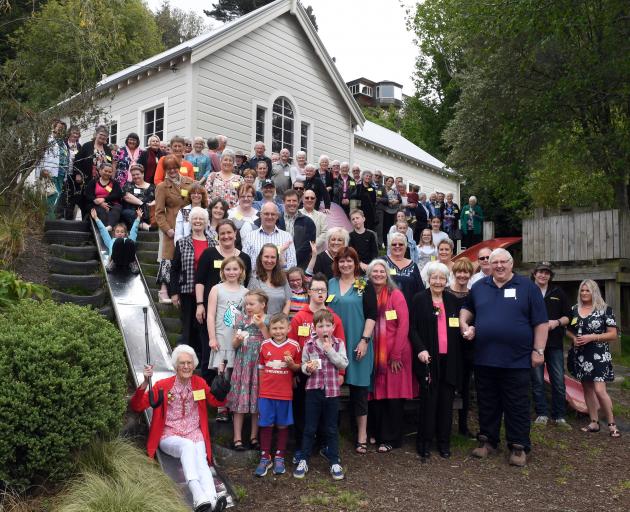 Gwen Jones (93) sits on the slide next to successive generations of St Leonards School pupils and teachers at the school’s 150th anniversary celebrations on Saturday. Photo: Stephen Jaquiery
Nola Patrick had few excuses to be late to school — she lived right next door.

"I think I might have been late a few times though," the 90-year-old former St Leonards School pupil recalled.

She was one of more than 180 former pupils and staff who marked the school’s 150th anniversary over Labour Weekend.

Nola Patrick started at St Leonards in 1933. Her children also went to the school,  although she had moved around the corner by then.

"It was a lovely place to grow up and a lovely school."

Founded in 1868 as the Upper Harbour Side School, its name was changed in 1883 to St Leonards School.

The original school building no longer stands but its replacement,  built in 1885,  remains in use and was freshly painted for the jubilee.

Andre Mabon  was taught in the old building  and  returned as a teacher to  the modern-day classroom block.

"There’s a lot of history here for our family, and it was really wonderful schooling," she said.

Current principal Jo Wilson said it was moving to see how many generations of a family had attended St Leonards School.

"There is something about the St Leonards community."

"There are six generations of one family here, which is pretty unheard of really," she said.

"There were 186 registrations for the weekend."

An evening function was held on Friday  and  a dinner function on Saturday. Any funds left over after the jubilee will go towards maintenance of the 1885 building.