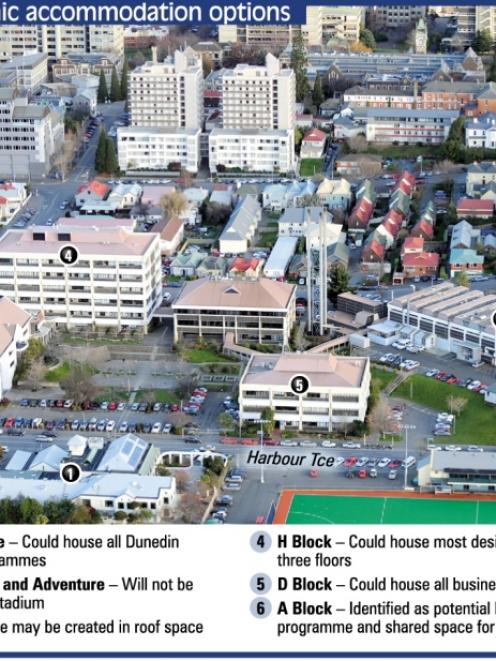 Otago Polytechnic has decided against moving its Institute of Sport and Adventure to the Forsyth Barr Stadium, saying fit-out and lease costs are higher than it can afford.

Relocating the institute from its present building in Union St to the second floor of the stadium was investigated, but a report to today's polytechnic council meeting said the indicative fit-out costs of $800,000 and annual lease costs of at least $75,000 were "higher than we can afford".

The move also posed "too much risk long term due to lack of ownership, the necessary length of occupation to recoup the fit-out costs and some access issues", the report said.

However, the report said the polytechnic still had concerns about the institute's present home as the Union St building was run down, was inefficient, and was on leasehold land.

The report also outlined various possible options for relocating other programmes between buildings at the Forth St campus.

The Design School may be housed in three levels of H Block, on the corner of Union and Forth Sts, allowing the polytechnic to relocate fashion design away from the former Big Fresh supermarket building on Cumberland St, back to the main campus.

It was expected all hospitality and cookery programmes could be accommodated in the Manaaki building on Harbour Tce, allowing all business programmes to be located in D block, also on Harbour Tce.

Another project being assessed was building an extra 600sq m teaching areas into the roof space of G Block, on Union St.

Preliminary estimates put the cost at $575,000, including extending two stairwells, modification of corridors, installation of fire walls and installation of a new lift.

It was possible the sports institute could relocate to that space, the report said.

The polytechnic council would be asked in September to approve plans for stage one of the redevelopment of the School of Art site, the report said.

There are ambitious plans for a $25 million upgrade of the site, bordered by Anzac Ave, Albany St and Reigo Sts, over the next 12 years.

An elderly building on Anzac Ave is being demolished to make way for stage one, a two-storey classroom block of 780sq m to house bachelor of engineering students.

It had been planned to build a 400sq m building at a cost of about $1 million, but the report said it was now planned to almost double the size of the building, with construction and fit-out expected to cost $2.1 million.

Polytechnic chief operating officer Philip Cullen yesterday said the construction time-frame was "tight but do-able" and it was hoped the building would be complete for the 2011 academic year.

As a fall-back position, the polytechnic was discussing with the University of Otago leasing space temporarily in the Albany St buildings housing the former Phoenix Centre school for troubled teenagers.

The University purchased that site and a neighbouring property late last year.