Stars of future to celebrate the past 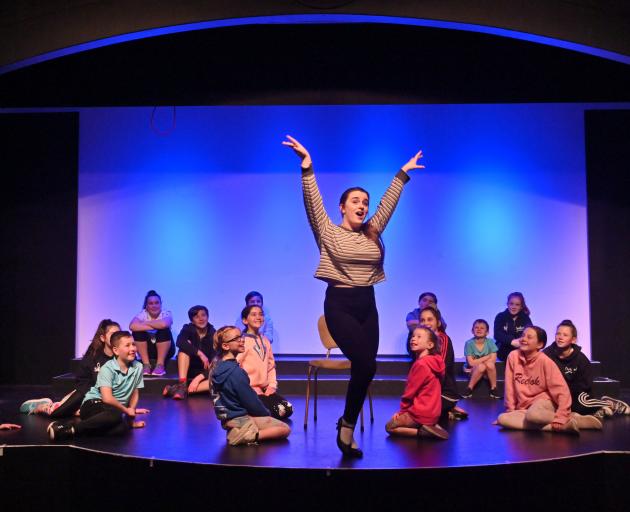 Jessica Mulholland (18) performs ``Whistle a Happy Tune'' from The King and I. She is surrounded by young performers aged 7 to 13 years at a rehearsal for the Future Stars theatre restaurant. PHOTO: LINDA ROBERTSON
The Dunedin Musical Theatre is preparing for its 90th anniversary in toe-tapping style - bringing in young singers to recap some of the most memorable songs performed over the life of the theatre.

The Future Stars production, featuring songs from shows ranging from South Pacific to My Fair Lady and Oklahoma!, will be performed between July 18 and July 27, in the theatre's rooms in Sullivan Ave.

Theatre president June Driver said the 20 young stars auditioned from the community, and there were two age groups, 7-13 and 16-20.

Ms Driver described it as a "musical revival".

"Theatre restaurant was started as a way to encourage performers on to the stage to gain confidence.

"This theatre restaurant is a young cast [and] the theatre has kept the youth theatre going by also training people in sound lighting."

Long-time musical theatre performer Gladys Hope, who has taken part in numerous shows in her 53-year stint with the theatre, said she had seen the rehearsals for the show and there were "a lot of exciting young performers".

"Everybody loves to see young people that get on stage strutting their stuff."

Ms Hope said she was still going strong, with no plans to stop.

She had had many highlights in her time with the company but said her all-time favourite role was the villainous Madame Thernadier in Les Miserables.

"I had the great honour of meeting her afterwards and taking her backstage."