Staynes 'getting on with life' 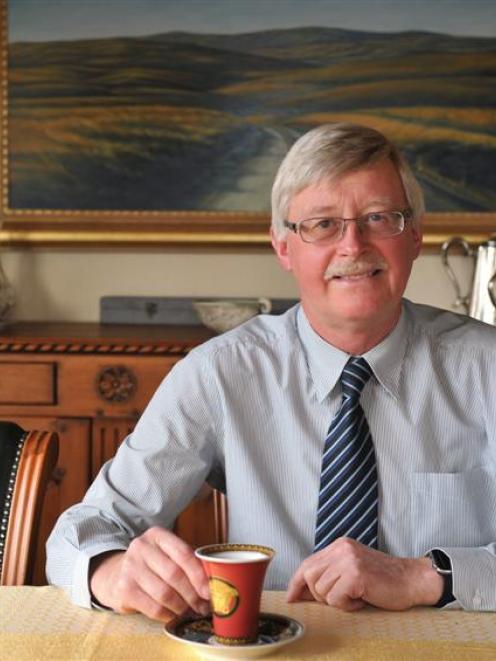 But after being diagnosed with terminal cancer, and undergoing his first round of chemotherapy, Cr Staynes is having to make some adjustments.

Cr Staynes (64) yesterday confirmed to the Otago Daily Times he had been diagnosed with a particularly aggressive form of prostate cancer in April.

Subsequent tests had confirmed the cancer's spread beyond his prostate, into his bones at ''multiple sites'', meaning his long-term prognosis was bleak, he said.

''It's incurable, so yes, it's a terminal cancer. What that means in terms of how long I live is still a moot point.''

Cr Staynes said the news had come as a shock, and the side effects of chemotherapy had already claimed his sense of taste - replaced by a metallic flavour that meant ''everything tastes horrible''.

That was hard to take for the long-time wine-lover and director of retail outlet Wine Freedom, who stored 2000 bottles - together worth more than $100,000 - at his Dunedin home.

He hoped to regain his palette in time, but had no immediate plans to relinquish his duties as Dunedin's deputy mayor.

Instead, if his health held up, Cr Staynes said he still hoped to stand for election again next year.

''I'll certainly have to review that, but at this stage I've got an unfinished job. There's still work to be done in the city that I wanted to be part of.''

And, in the meantime, Cr Staynes had a message for other men who might be putting off a prostate exam: don't be ''a wimp when it comes to doctors''.

''It's certainly, in my opinion, a significant issue for males.''

Cr Staynes' family had a history of prostate cancer and he first saw his doctor four years ago, as his own problems in the ''waterworks department'' worsened.

He was given the all-clear after a simple PSA test and accepted the results, despite continuing to harbour suspicions and symptoms, but without seeking a second opinion or getting regular checks.

Eventually, when he could not sleep through the night without needing to use the toilet, he returned to his doctor in March this year, and then saw a specialist.

The truth was quickly revealed when the specialist conducted a normally painless examination.

''He touched my prostate and I just about went through the roof. Immediately he said: 'You've got cancer'.''

Cr Staynes said the diagnosis left him in a dark place initially, but he harboured no bitterness towards the health system.

''I was my own worst enemy. When I had the first results I should've questioned them, because I knew something was not right.

''You have to take responsibility for your own health. I failed to do that, so I pay the price.''

His care at Dunedin Hospital's oncology department since the diagnosis had been ''fantastic'', and he was determined to retain a positive outlook and ''get on with life''.

''It took about three weeks for me to come to grips with it and decide, 'Well, hey - if you're born, you're going to die'.

''All I know, which other people don't know, is what's likely to be the cause of my death.''

Some prostate cancer patients could expect to survive ''three to five years'', while others lived for a decade or more.

New drugs just entering the market could also extend that, but were for ''later in the journey of the disease'', he said.

''I'm at the front end of it. Hopefully, the treatments that I've got will mean that it slows it down significantly, and that the end point is out in the future a long way.''

The support he had received from his wife of almost 40 years, Cheryl, as well as family members and council colleagues had been ''humbling''.

But, with five more rounds of chemotherapy ahead of him, he was preparing for side effects to worsen.

His immune system has already collapsed, leaving him at risk of common infections that could be ''lethal'', and he was experiencing hot flushes.

His hair was also expected to fall out over the next few weeks, including the moustache he had sported for 43 years.

The loss of his palate also meant Cr Staynes had deferred plans to celebrate his 65th birthday next weekend by holding a sizeable wine-tasting event.

That would be put off until March next year, when he and his wife marked the ''trifecta'' of both their birthdays and their 40th wedding anniversary.

Open a few of his favourite ''signature'' wines - bottles of Chateau d'Yquem from Sauternes, in France - and hopefully savour the taste.