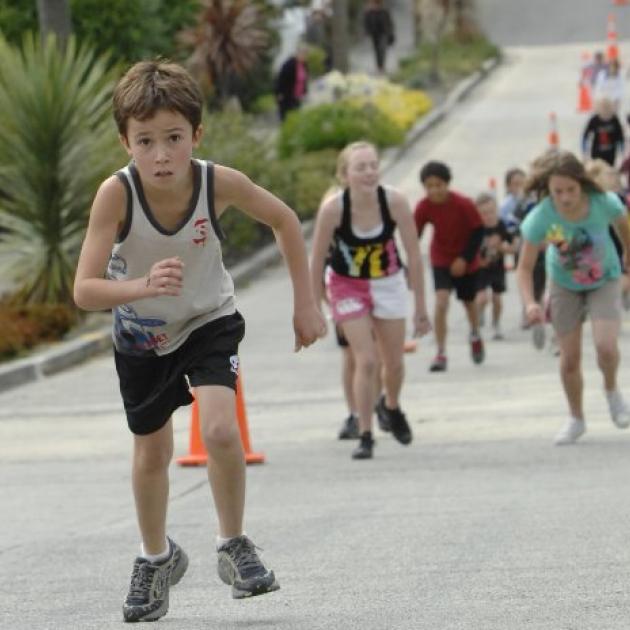 The Liberton Christian School pupil received the loudest applause of the day as he won the children's section of the annual race up and down the ‘‘the world's steepest street''.

Recording an impressive time of 3min 06sec, Oliver had a few moments to catch his breath before cheering on his twin sister, Francesca, who was second.

‘‘I enjoyed doing that. My legs felt like jelly on the way down. But I kept on going and picked up the pace, and I ended up winning the race.''

A member of the Hill City Athletics Club, Oliver prepared for the race by running up the hill minutes before his race.

Winner of the competitive race was Dunedin personal trainer Michael Phillipps (28), in 2min 20sec, well short of the race record of 1min 56sec, set in 1998.

Mr Phillipps said he had not competed in the race since he was 12, ‘‘but despite my headache, I am glad I did it''.

Leading from the outset, he said the secret was to run as fast as you could on the way up.
‘‘Because on the way down your feet will do it for you.''

The oldest competitor in the race yesterday Dave Kernahan (56) said the race was not that difficult for him, even if the runners were getting younger. ‘‘That's because I run up Baldwin St 30 times every day. ‘‘It was just another day for me.'' The secret was to run up and down the street on a lean, a tired but happy Mr Kernahan said.

‘‘It is great to have nice weather,''

Mr Murphy said. ‘‘Last year, we were only able to run up the hill due to the wet conditions, so it made for a great spectacle.''