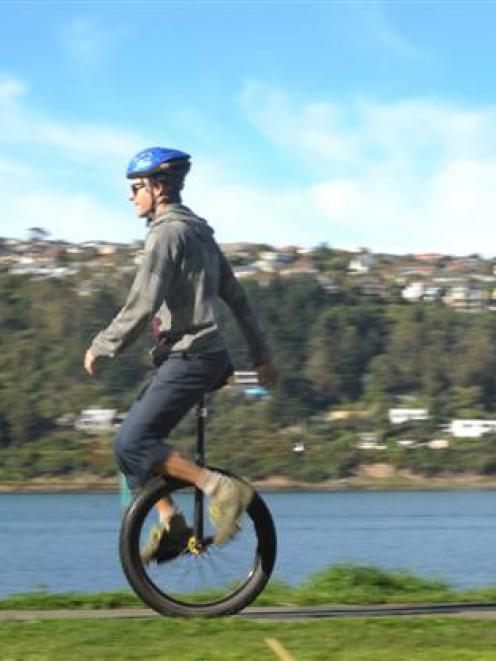 On One Unicyclists Dunedin club members Paul Cardno, Scott Kerr and Daniel Goodman ride their unicycles on the Harbour Cycleway near the Dunedin Yacht Club as part of Family Wheels Day yesterday. Photo by Peter McIntosh.
Family Wheels Day yesterday may have been intended as a celebration of the completion of stage one and two of the Harbour Cycleway.

But according to organisers, it also served as a subtle, yet positive, reminder to the Dunedin City Council that the end result of the project was taking too long.

Chalmers Community Board deputy chairman and Harbour Cycle Network member Steve Walker said the network was dedicated to raising concern about the lack of safe cycling and walking facilities in the West Harbour area of Dunedin.

It had a "longer-term goal" of encouraging the development of a safe and attractive cycle-walkway around Otago Harbour from Aramoana to Taiaroa Head, on Otago Peninsula.

Mr Walker said about 100 people rode along the cycleway yesterday to celebrate the extension of the cycleway to Maia.

However, many were also there to show their frustration at the slow progress on the extension of the track to Port Chalmers.

"There is money in the council's annual plan for it. They say it's going to take five years to finish it out to Port. That's just far too long," Mr Walker said.

The event was a joint venture between the Chalmers Community Board and the Harbour Cycle Network.