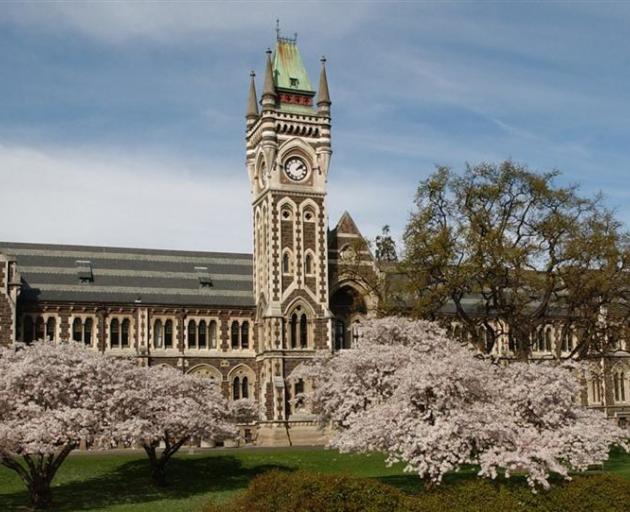 Nearly 100 unmarked student examination scripts have been stolen in a burglary at the University of Otago's Clocktower building, in what the institution says is a "reprehensible act''.

University officials said today there had been "considerable damage to property'' and the scripts had been taken from the exams office in the break-in last Saturday night.

Dunedin police told the Otago Daily Times on Monday that a break-in had occurred, but university officials said at the time that inquiries were continuing to ascertain what may have been taken.

Today they said 98 scripts were missing.

Campus Watch staff and police had responded, but the person or people responsible had gone by the time they entered the building.

Exam materials were held in a secure area of the Clocktower building, also known as the registry office. Most of the stolen exams had been sat by students on Saturday and the scripts were unmarked.

Deputy vice-chancellor academic, Prof Vernon Squire, said today that staff were contacting the 98 students affected and his immediate concern was for them.

"We understand how upsetting and disappointing this is for the students. The considerable effort they have put into their study and exams has essentially been ruined by this reprehensible criminal act.'

"We will do all that we can to support the students,'' Prof Squire said.

A range of different subjects was involved and the students were at different stages of their courses.

"It is our hope that the scripts will be returned, but at this point we need to put plans in place as this may not occur," Prof Squire said.

"Therefore, we are making arrangements with the students to prepare for a likelihood that their scripts will not be returned. We remain hopeful that this crime can be resolved."

Planning and effort had "gone into this act'', and there may well be people in the North Dunedin area who had information that "could help the police in their investigation'', he said.

"I strongly urge anyone with information to contact the police as soon as possible,'' he said.

• Dunedin Central Police Station can be reached on 03 471 4800. Alternatively, information can also be provided anonymously via the organisation Crimestoppers on 0800 555 111.