Stream of complaints over mud-tank maintenance 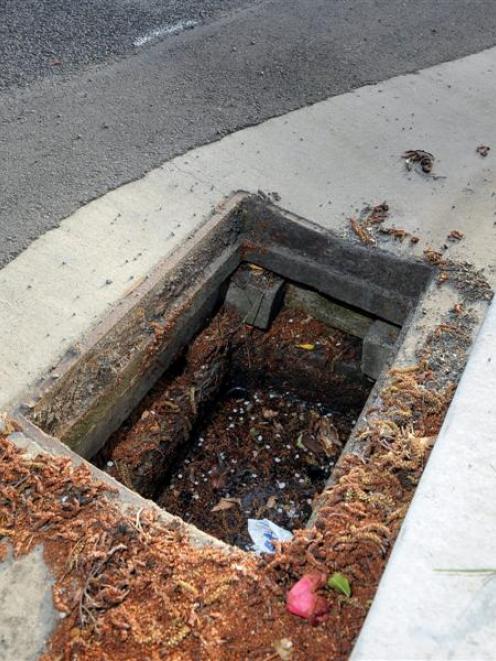 A mud-tank without its grate. Photo by ODT.
Dunedin's flood has been followed by a deluge of complaints about inadequate maintenance.

The Otago Daily Times received a steady stream of complaints yesterday reiterating concerns about a lack of basic maintenance in parts of the city.

They came a day after some southern Dunedin residents claimed inadequate cleaning of mud-tanks by the Dunedin City Council's contractor, Fulton Hogan, had contributed to last Wednesday's flooding in the area.

Dr David McKay, of the University of Otago's Centre for Sustainability, said he had repeatedly complained to the council about blocked mud-tanks in the area around his Reynolds St home.

On Wednesday, while driving to work shortly after 8am, he counted 62 blocked stormwater drains, and just 11 that appeared to be working properly.

Dr McKay, who said he had a ''practical'' background in drainage and construction, kept a close eye on drains in his area.

He believed most were blocked before Wednesday's flood, and four in particular near his home were ''always blocked''.

He had ''given up'' contacting the council after repeated complaints failed to resolve the problems.

Fulton Hogan appeared to be focused on the CBD, and resorting to a ''band aid'' approach in outlying areas, he said.

Tom Moore, who used to work in the council's city engineer's department, said the council was in ''a state of denial'' about its mud-tanks.

Wednesday's rainfall would ''unquestionably'' have flooded parts of the city even with a fully-functional stormwater system, but there was ''not a shadow of doubt'' poor mud-tank maintenance had contributed to flooding in some areas.

''With hand on heart I can say that I have not seen a mud-tank being serviced in this city for several years, despite the fact that I actively take an interest in such things because of my work background.''

Mayor Dave Cull has denied maintenance was to blame for flooding, but Mr Moore said there was ''no smoke without fire''.

Ray Sinclair, of Careys Bay, said before Wednesday's flood there were five mud-tanks in poor condition near his home - two blocked with mud, and three half-full of gravel and other debris.

One also had a broken grate, but concerns raised with council and community board representatives had been overlooked, he said.

Mike Hickling, of Motu St, St Clair, said it had taken ''several months and multiple calls'' to the council to have one mud-tank properly cleaned, but others had been overlooked.

''During the rain last week, at least three of the other four mud-traps in Motu St were completely blocked, despite repeated requests to have these cleaned,'' he said.

Mike Thompson said Fulton Hogan appeared to be focused on mud-tanks in the inner city, while overlooking those further out.

He was aware of blocked mud-tanks along Cumberland St, south of Queens Gardens, which had not been cleared despite complaints.

Fulton Hogan regional manager Grant Sime, contacted last night, did not want to discuss the complaints in detail, but reiterated he was ''fully confident that we are meeting our contractual obligations''.

''We have got records to back that up.''

Mr Cull has previously acknowledged the southern Dunedin network was not built to cope with Wednesday's 1-in-100-year rainfall, and that debris washed into the mud-tanks by the flooding had made matters worse.

However, he has insisted council records showed mud-tank maintenance was ''completely up to scratch'', and those claiming otherwise were ''wrong''.

Despite that, Mr Cull confirmed on Sunday the council would review the work of its staff and contractors as part of a wide-ranging flood ''postmortem''.

Council infrastructure and networks general manager Ruth Stokes said yesterday the council was already working with Fulton Hogan to get more information, including a ''full account'' of mud-tank maintenance in recent years.

The council would also examine its own monitoring of Fulton Hogan's work, which should identify any instances of misreporting, she said.