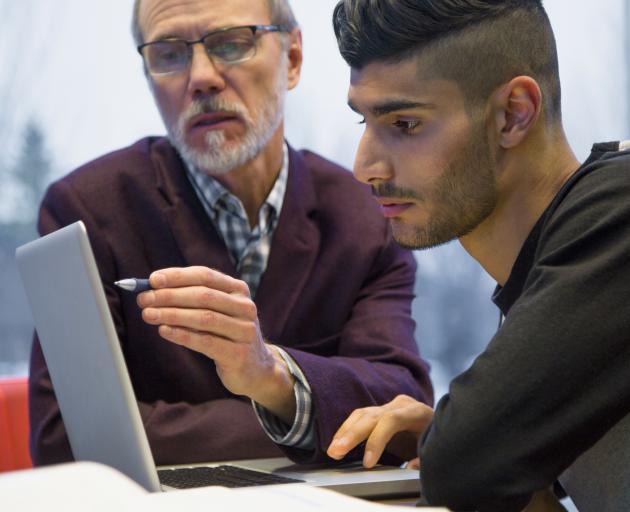 Refugee communities have been set up around the country, including Invercargill and Dunedin, where most refugees will be learning English. Photo: Getty Images

Some English language schools in the South Island are struggling to find qualified teachers for new refugees.

New Zealand is set to increase its annual refugee quota from 750 to 1000 in July, the first change to the quota since 1987.

Refugee communities have been set up around the country, including Invercargill and Dunedin, where most refugees will be learning English.

It's a long road from South America to one of New Zealand's southernmost towns.

There are more than 50,000 people living in Invercargill, and 29 of them are newly-arrived refugees from Colombia. By June next year there'll be 119 Colombian refugees there.

They have to learn English, but finding a teacher for them is difficult.

Birgit Grafarund-Watungwa, who is the operations manager for the charity English Language Partners, arranges the classes.

She said teachers had to have a New Zealand teaching qualification, as well as a certificate to teach English as a second language.

"In the first round they didn't find someone with the right qualifications and so they had to readvertise."

She said they were having the same problem now as they prepared for the next intake of refugees.

Sue Price from the Red Cross said the Colombian refugees had settled in well, despite language barriers.

"They're a little bit spread out across the city, but they're learning how to get around the city where supermarkets are and where the services that they need to get to are."

The city is home to 421 refugees, and about 92 of them are taking English classes.

Centre manager for Dunedin English Language Partners, Paul Naidu, said in their most recent round of hiring, they had 20 applicants, but only two were hired after making a shortlist of four.

"We received those over a period of four weeks, and like I said, not all of them were suitable. In fact only, literally, about a quarter."

Mr Naidu said it was even harder to find a teacher who could work with refugees.

"A few teachers may have qualifications but not necessarily the experience and vice versa. So finding the right teacher with a good organisational footing is a challenge, and also you want someone with a fair degree of life experience, especially if they're working with former refugees."

Gillian Leigh had been reaching refugees for eight years in Christchurch, before moving to Dunedin two years ago.

One of the challenges was that some of her adult students had never learned to read and write in their mother language, she said.

Both centres are gearing up to prepare for another struggle to hire more teachers as they get ready for the next intake of refugees in July.