Student’s trip for mice and moths 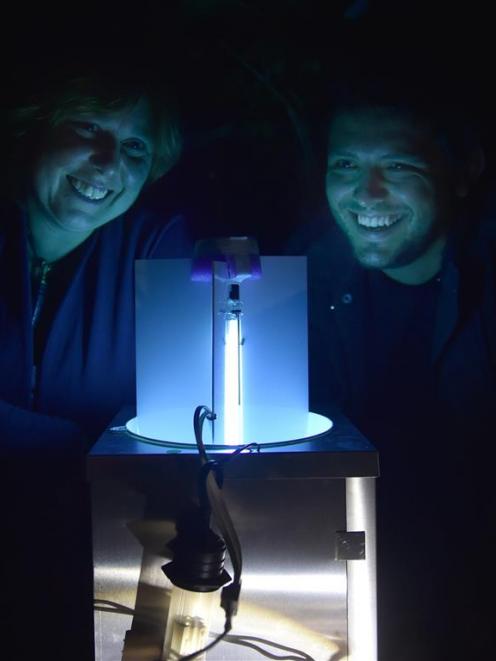 Barbara Anderson and Max Buxton check the moth trap last night. Photo by Peter McIntosh.
A University of Otago student has been added to a team heading to the Antipodes Islands to eradicate mice - once his boat arrives, that is.

Max Buxton (24), who is completing a master's project on biotic interaction, was scheduled to head to the subantarctic islands yesterday as part of the Million Dollar Mouse project, funded by the public and various organisations.

The project aimed to eradicate the only mammalian pest species on the Antipodes, which was introduced in the middle of last century and had wreaked havoc by eating eggs and chicks of seabirds and huge numbers of insects and plant seeds.

He then planned to see how the potentially changing behaviour of the moths affected the ecosystem on the islands.

However, the Royal New Zealand Navy boat scheduled to take the team to the Antipodes, HMNZS Canterbury, was placed on standby to assist in relief efforts following tropical cyclone Winston in Fiji.

"It will be on standby for at least a week,'' Mr Buxton said.

Still, the excitement levels remained high for Mr Buxton, who had already been to the islands three times.

Weather permitting, he would be on the islands for 17 days and hoped to fit in six days of moth trapping.

The traps worked by attracting moths by light and securing them in a bag through a funnel.

"They are automatically lit. They go on at night and turn off in the morning.''

The moths would then be frozen and analysed, he said.

Landcare Research scientist Barbara Anderson, who was helping to oversee Mr Buxton's master's project, said moths were an important part of the ecology of the islands.

She hoped researchers would be able to return to the islands regularly to map developments.

"We can get quantitative evidence of how much of an impact the mice eradication has had and on what time scale.''

Mr Buxton's journey to the Antipodes would take about a week, he said.

It would take two days to travel to Campbell Island, where Canterbury would remain for a few days, and another two days to reach the islands.