Student gets money for nothing from banks 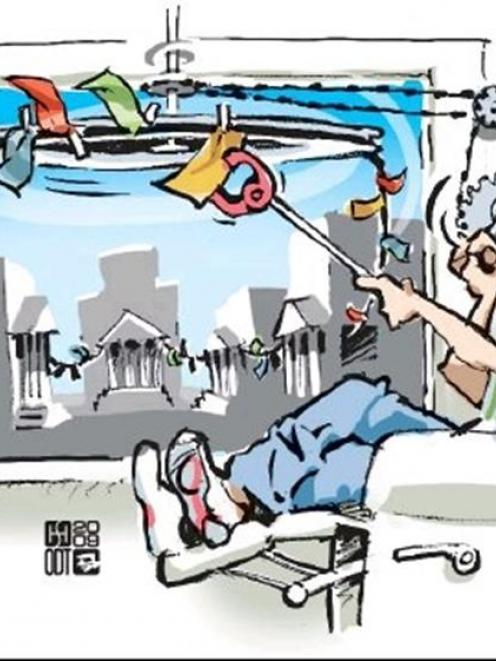 An enterprising University of Otago student spent last year "stoozing" - and now he's laughing all the way to the bank. Mark Price reports on a shrewd investment scheme.

A University of Otago business student is celebrating the end of a year in which the banks provided him with $500 of free money.

The student, who prefers to remain anonymous, employed a system known as "stoozing", which works in a similar way to the international "carry trade" - where money is borrowed at a low rate in one country and invested at a high rate in another.

The student realised banks trying to attract students as customers had created a similar, legal, opportunity for free money within New Zealand.

"Stoozing" is a slang term to describe an activity where money is borrowed at 0% interest and invested elsewhere. Eventually, the borrowed money is repaid but the interest it has earned remains with the "stoozer".

Most major banks offer low-cost overdrafts for students in the hope of encouraging them to become regular customers.

At the beginning of last year, the student visited four banks and set up bank accounts with 0% overdrafts. He then withdrew all the money - amounting to $6000 - and invested it for one year in a safe term deposit at a rate of 9.25%.

The idea came to him while he was taking advantage of a bank promotion offering students $40 to open an account - "an easy way to make some fast beer money".

While he was filling out forms for an account with a $2000 overdraft, he noted the "very small" bank charges if the account was in overdraft - $2 a month.

The student then opened similar accounts at other banks.

Because two of the banks required the account to show activity during the year, he also set up automatic transfers.

He asked the bank where he held his usual bank account to make an automatic $150 payment each Tuesday to one of the overdraft accounts.

"I then went to the bank where the $150 would be going and asked them to transfer that same amount of money to the overdraft account at another bank.

"I then went to the third bank and got them to transfer the money back to my spending account (where it had been on Tuesday) and the $150 showed up in my account on Friday. This happened every week for a year."

Bank staff did not realise what he was doing and the scheme had not been hard to co-ordinate.

"It only took a couple of minutes talking to the tellers, telling them what I wanted, and checking to make sure they had got it right."

He chose to invest the overdraft money at Kiwibank because it was one of the few banks where he did not have an account.

People he had told about the scheme had considered the rewards too small, and even smaller now that interest rates had gone down.

It was only after he had set up the scheme that he realised it had a name.

Wikipedia suggests stoozing was named after an internet discussion board contributor, Stooz, who was a prolific stoozer.

"Stoozing isn't exactly a way to get rich," the student said. "That's why I just took one afternoon to go around and do it - because the profit isn't that much."

The most important aspect of the scheme was to ensure the borrowed money remained intact - invested safely and repaid by the due date.

"Mostly, I just did it because it seemed like a way to make some money and figure out some of the systems banks have in place. It is sort of my chosen field of study."