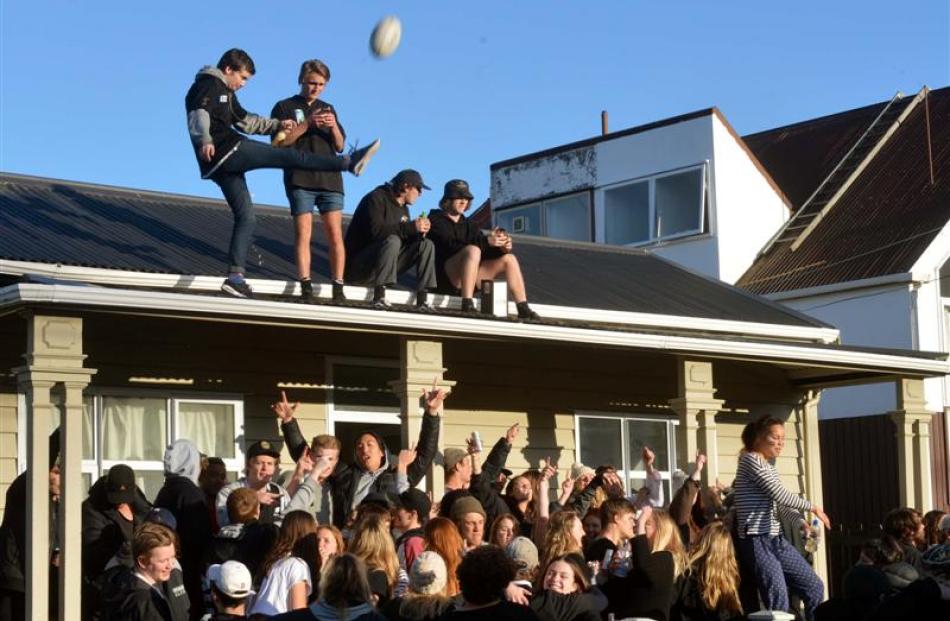 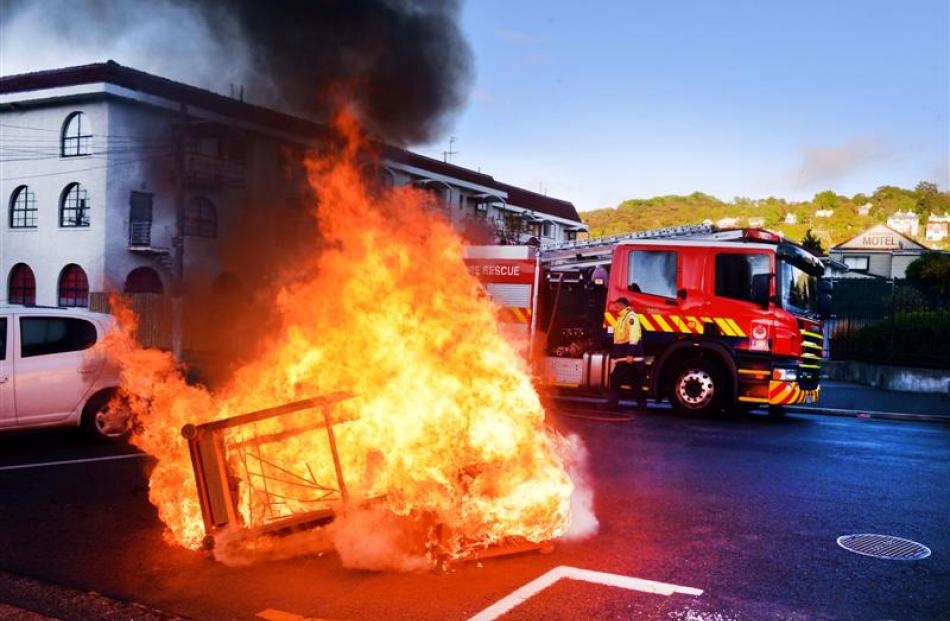 One of several North Dunedin couch fires draws the attention of the Fire Service yesterday morning. Photos by Stephen Jaquiery.

As Dunedin's Ben Smith was lighting up Twickenham by setting up the All Blacks' final breakout try, Dunedin students and others were lighting up Castle St with a blaze of broken couches.

The Fire Service was called to 13 fires - most of them couch fires - in the city's student district between about 1am and 8pm yesterday.

But Otago University students said the fires were ''celebratory'' and ''fun'' - not acts of intentional public nuisance.

Most of the fires were on a vacant section at 627 Castle St where students spent Saturday building a makeshift grandstand out of decrepit and broken couches.

A ''big screen'' had been set up using a projector and a black sheet hanging from the side of the neighbouring house.

Some 100 people watched the game on the couch filled section and it was those couches that were torched during the after match celebrations, one student said yesterday.

''Something like this, it only happens on special events. It wasn't a bad response, it was more celebratory.''

Another said the couch burnings were ''continuing on tradition''.

''It's part of the scarfie culture. It unites us in some way. If there's a couch burning it's like, woah, get to the couch burning right now. It's like it binds us together.

''And they're crap couches. They might as well get burnt.''

A third said the burnings were not an act of defiance or menace.

Dunedin Central Senior Station Officer Rob Torrance said his station attended nine couch fires between about 6am and 11.30am yesterday, with the Willowbank station attending ''a few'' more.

The bulk of the fires had centred on the 627 Castle St section. That blaze was big enough to be seen from the Willowbank fire station, he said, and scorched the side of the neighbouring house.

A ''few'' other couches were burnt on various North Dunedin streets but the students offered ''no problems'' to the attending fire crews, Mr Torrance said.

''They're drunk. But they're being reasonably polite about it.''

Although Sunday morning's outbreak of couch fires was ''probably one of the bigger ones we've had this year'', in general the fires had decreased markedly in the past five years, Mr Torrance said.

Senior Sergeant Craig Brown of the Dunedin Southern District Command Centre said police made one arrest yesterday just before noon in Castle St, but that arrest was not thought to be connected to the couch burnings.

Police also broke up a large ''student'' party being held in a commercial building in Great King St after several instances of disorderly behaviour, although no arrests were made.

Snr Sgt Brown said the students' behaviour had generally been fine, but the couch burnings were ''a bit disappointing''.

''Obviously, the World Cup final coincided with the end of exams and bits and pieces, but there's no need to return to that sort of thing.''

A university spokeswoman said if the university's students were caught lighting, or attempting to light, fires ''they'll be in serious trouble under the student code of conduct''.