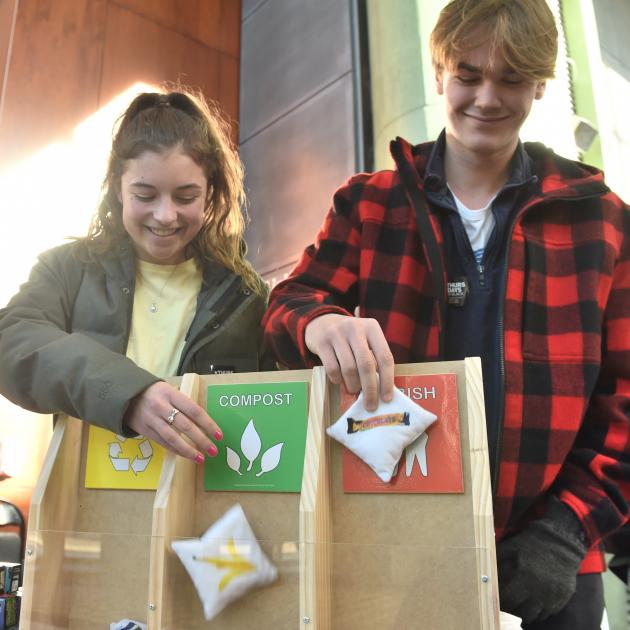 Health science students Diana Barbu (18), of Ashburton, and Harrison Groom (19), of Wellington, try a recycling activity at the Dunedin City Council stand in the Link on Thursday. PHOTO: GREGOR RICHARDSON
University students have revived their traditional week celebrating all things green - including composting, an information day, and a movie screening.

Enviroweek began on Monday, with a screening of Waste. There were then composting workshops on Bokashi bins on Tuesday, and a stitch kitchen workshop on Wednesday - where students created sewing bags to use in a city-wide rubbish clean up.

Through the bokashi bin method, one bin slides into another bin - and the inside bin has holes for drainage.

Otago University Students' Association president James Heath said OUSA had not had an Enviroweek for a few years, and thousands of students had attended the events.

"The whole week's been a highlight; things have been really, really well-attended."

The composting workshop was at maximum capacity.

Dunedin City Council waste education and promotions officer Cath Gledhill said the council sold the bins through its service centre and they were "very, very popular" in the city.

The trick was to have the space, since the compost material eventually needed to be buried.

During the information day eco-friendly items had been given away, including beeswax food wraps and keep cups.

The week was organised by OUSA and its affiliated clubs, and by the Dunedin City Council, the university's sustainability centre and Keep Dunedin Beautiful.