That sentiment was reiterated by many of Dunedin’s students yesterday as, decked out in green, they celebrated a quite different occasion.

St Patrick’s Day revelries began early in Castle St, as residents split into boys and girls groups for a daytime flat crawl — one party-goer said they began drinking at 7am. 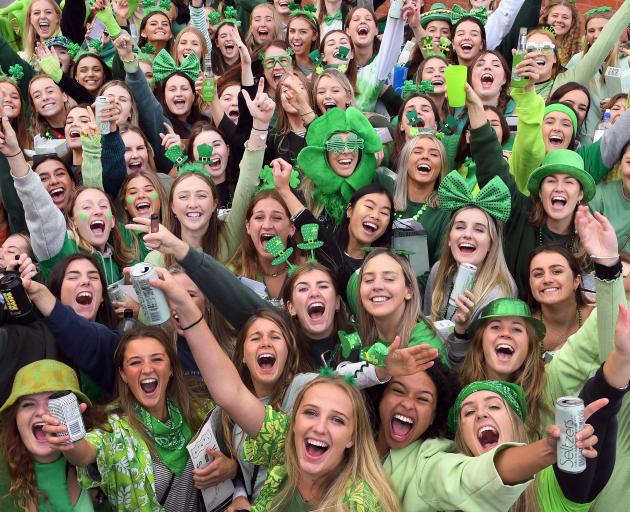 The street was a sea of green as revellers moved from flat to flat, seemingly undeterred by a drizzly Dunedin morning.

Meanwhile, on the corner of Queen and Union Sts, a large group of young men were donning blue instead of the traditional green for their party.

It was a gathering of former St Patrick’s College, Wellington pupils, who were wearing their old school’s colours.

The group got together each year on St Patrick’s Day, one attendee said.

Police appeared to be anticipating a busy day, Senior Sergeant Craig Dinnissen saying the annual Irish celebration had become a siren song for drunkenness in the city.

"It’s not what St Patrick’s is about, but we seem to be taking it to the umpteenth degree."

Dunedin police had noticed it growing in scale every year and intoxication occurring earlier in the day.

By late afternoon, there had been few incidents, Snr Sgt Dinnissen said.

"It’s been not too bad. Staff are out there working in that area."

Police were seeking a male in relation to an assault earlier in the day, but otherwise there had been no major problems, he said.