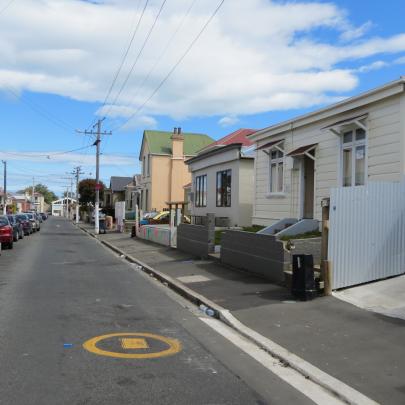 Students are being put through hazing rituals by current tenants as initiations after securing flats for the following year in popular student areas such as Hyde St. Photo by David Beck

Dunedin tertiary students who have secured flats in popular areas such as Castle St and Hyde St are being put through hazing rituals by tenants leaving the flats.

Flat initiations are particularly common for students securing a flat for their second year of study and generally involve excessive amounts of alcohol.

A University of Otago graduate, who preferred to remain anonymous, said he and five other male students who managed to secure a six-room flat in Castle St for their second year were told they had to do an initiation.

''There's so much demand for a limited number of popular flats - most first years were signing flats before the midyear break. When we went and viewed the flat they told us we'd have to come and do an initiation.

''We were pretty nervous when we got there - it's not just the guys initiating you, the whole street comes out to watch. We knew we had to do it. It's not as if you have to do it to live there, but it's a social thing - you're expected to do it,'' he said.

The initiation was well organised. There was a barrel filled with cans of alcohol floating in water, each with a number printed on it. The six men being initiated took turns pulling out a can at random - each number corresponded to an activity.

''They were mostly designed to make us look stupid, but at the same time it was still fun.''

The numbers on the cans were also totalled for each participant and at the end whoever had the most points got first choice of a haircut.

''I got the most points but I chose the stupidest one - my hair shaved into the shape of a cross. Some of the others were a receding hairline, a bowl cut and a fringe.''

The following year the group had the opportunity to initiate the next lot of tenants - they organised a similar game, but this time a paintball gun was involved.

''[The initiations] can border on bullying and not everyone has the same tolerance, but at the same time the scarfie culture was one of the things that drew me to study in Otago - it's a big drawcard,'' the student said.

University of Otago deputy proctor Andrew Ferguson said the university did not approve of the initiations.

''Students do not need to take part in drinking games, initiations or ceremonies. The student code of conduct at Otago forbids organising initiation events or ceremonies requiring the consumption of alcohol or dangerous dares.

''This is because they can jeopardise fellow students' wellbeing, personal safety and they sometimes encourage students to break the law. Often, the students who organise these activities end up regretting their actions.

''This is why the university takes a hard line with organisers of such events. It is simply not acceptable to coerce students to take part in dangerous activities that can harm them.

''The Selwyn Ballet, the capping show and the toga party are among the long list of celebrated Otago traditions, but organised drinking games and initiations are definitely not,'' Mr Ferguson said.

Students needing support and advice in this area can contact Student Health, Campus Watch and staff at the university colleges.