Tackle on streaker under review 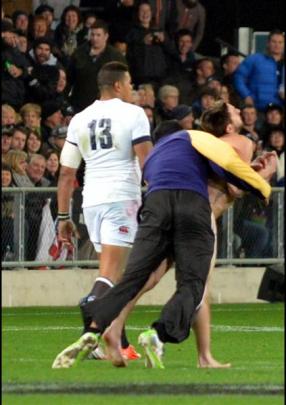 A streaker is tackled by security worker Brad Hemopo at the All Blacks versus England test match at Forsyth Barr Stadium, in Dunedin, on Saturday night. Photos by Peter McIntosh. 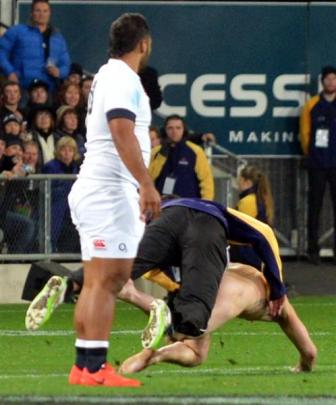 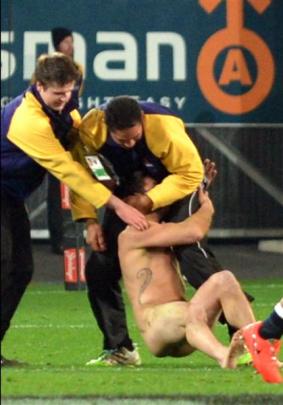 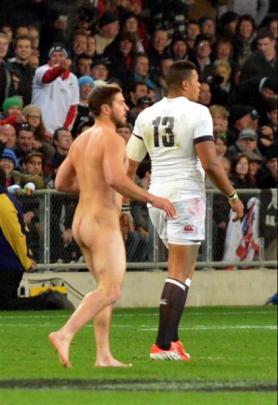 A tackle by a security worker on a streaker will be reviewed by Dunedin Forsyth Barr Stadium authorities.

The tackle, in the 62nd minute of the All Blacks v England test on Saturday, will form part of a postmatch review of the test, Dunedin Venues Management Ltd (DVML) marketing and communications manager Kim Barnes said yesterday.

''A postmatch review meeting will be taking place tomorrow morning with all relevant parties and this incident will be part of that review. Comment will be made after this meeting,'' she said.

Videos of security worker and New Zealand under-20 rugby team triallist and 2013 Crusader development team member Brad Hemopo's tackle of a 28-year-old streaker had attracted more than 200,000 views on You Tube late yesterday and comments were divided on the incident.

One person described the tackle as ''cowardly'' and another said it was a ''cheap shot''. Others defended the security guard and said the streaker would not have been tackled had he not invaded the pitch.

Mr Hemopo brought down the streaker from behind and three security guards escorted the naked man from the field.

When contacted, Mr Hemopo (19) said he could not comment. Sergeant Reece Munro, of Dunedin, said the arrested man from Christchurch had a ''cold night in the cells wrapped in blankets''.

He was released about 4.30am yesterday with his ''watch and covered in paper overalls''.

The man was ''moderately intoxicated'' when he arrived at Dunedin Central Police Station about 9pm and was charged with offensive behaviour.

He had been summonsed to appear in the Dunedin District Court on Wednesday. The charge was a fine-only offence with a maximum penalty of $1000.

''There's potential for them [pitch invasions] to be untidy.''

Questions to DVML concerning both the qualifications and the conduct of Mr Hemopo went unanswered yesterday.

Senior England teams media manager Dave Barton said the team had no concerns for the safety of its players because they were ''confident'' security ''would do their job''.

''It's one of those things that happen in matches,'' he said.

A spokesman for the All Blacks said they would not comment on the incident.