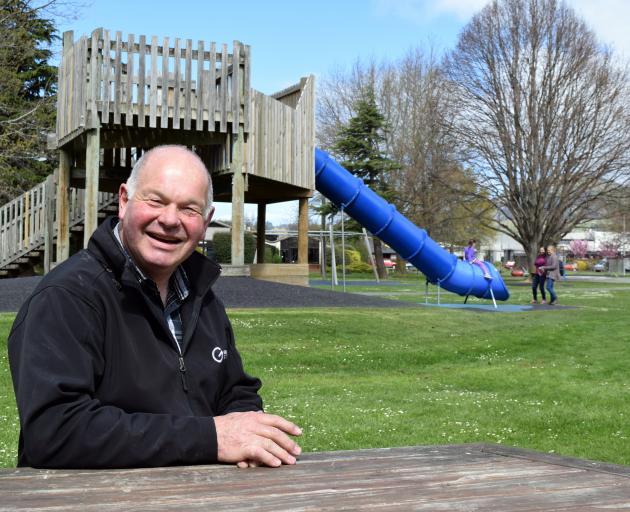 Festival of The Plain chairman Ian Chalmers is moving Party in the Park from Peter Johnstone Park to the Mosgiel Memorial Gardens. PHOTO: SHAWN MCAVINUE

Party in the Park is returning to its ‘‘original home’’ in Mosgiel.

Festival of The Plain chairman Ian Chalmers said the annual Party in the Park event was returning to its ‘‘original home’’ — the Mosgiel Memorial Gardens.

The next party in the gardens would be held on Sunday, February 23.

The family-friendly event moved to Peter Johnstone Park two years ago in a bid to make the party bigger.

Former Party in the Park co­organiser Kelly Aitcheson had stepped down and Mr Chalmers had picked up the organising position after being elected festival chairman earlier this year.

Since being elected, people had asked him if the party could return to where it originally started about 20 years ago.

The committee sought public feedback before making a decision.

An online poll showed 56% of people favoured the event returning to the ‘‘friendlier’’ Memorial Gardens site.

‘‘The results confirmed people preferred the more boutique setting rather than the big, open air event at Peter Johnstone Park.

‘‘The Memorial Gardens lend themselves nicely to the event as there is a children’s playground and the tree belts provide much more shelter for everyone.

‘‘Peter Johnstone Park can be a wind tunnel. This past year we struck a wet spell, the rain came through, the wind came through and the people went home.’’

The operators of bouncy castles preferred the gardens because the park was more exposed to windy conditions.

Another positive the gardens had over the park was its accessibility to more public toilets including baby changing facilities.

Trees in the gardens had been pruned substantially, creating more areas to expand the event and plans were being made to accommodate ‘‘more stalls, foodies, entertainment and children’s rides’’.

The party will launch a series of Festival of the Plain events, ending with a family fun day at Wal’s Plant Land and Fun Land and Cafe in Bush Rd.

Wal’s would return as a party funding partner for the second year.

Groups were floating other possible festival events such as a debate, drag race and talent quest.

‘‘There’s a whole lot of things in the pipeline . . . we are in negotiation with many groups to reignite the Festival of the Plain.’’