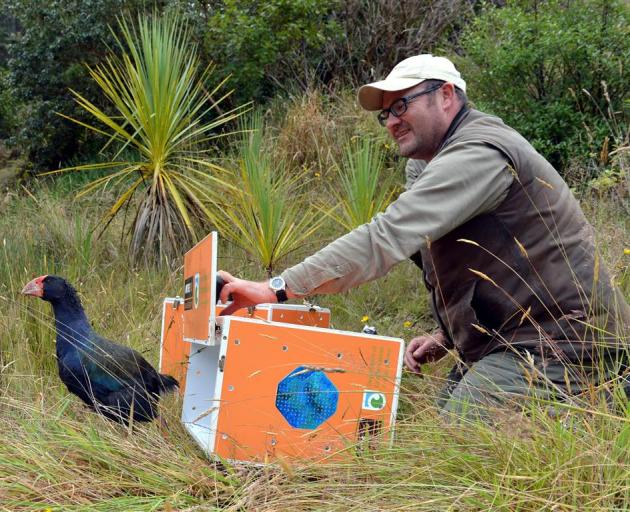 Two takahe arrived at Orokonui Ecosanctuary yesterday, one at a run and the other a bit more tentatively.

The breeding pair are Marokopa, the female, and Mohio, the male.

They arrived at Orokonui yesterday afternoon after a three-hour car ride from Burwood Bush, in Southland.

As soon as he was released, Mohio emerged at a run from the box he was transported in, quickly disappearing into the undergrowth and fog.

Marokopa came out a bit more hesitantly, peering around at her surroundings before wandering off.

Ecosanctuary conservation manager Elton Smith said that Marokopa had been raised at Burwood Bush, while Mohio was brought there after being bullied at Tiritiri Matangi, in the Hauraki Gulf.

"He was beaten up as a small bird, so they brought him down [to the South Island] to fatten him up and to pair up,'' he said.

The pair were placed at the other end of the sanctuary from Orokonui's other takahe, who are infertile.

Orokonui staff were hoping the new takahe would produce four eggs - two they would keep, and two that would go to the infertile pair.

"When these ones nest, we'll take their fertile eggs and give them [to the other pair],'' Mr Smith said.

"They'll raise up to two chicks up the top, and as soon as you destroy one nest, within weeks, these guys will re-nest, so at best, we'll get four chicks out of two pairs.‘‘When there's literally only 280 [takahe] left in the world, every single chick counts.''