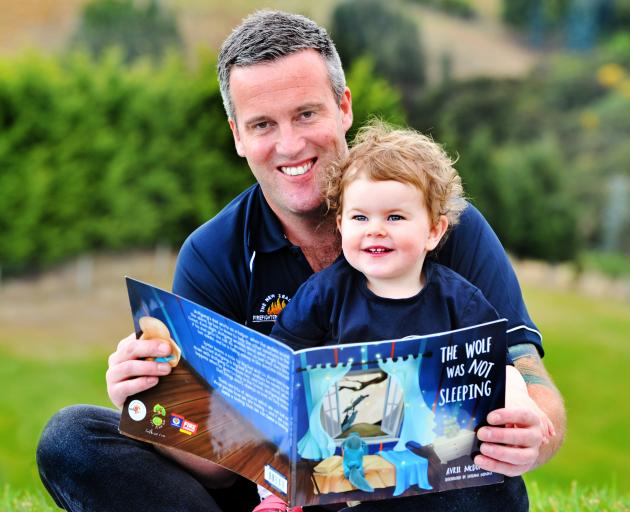 Dunedin firefighter Kris Kennett reads a copy of the book The Wolf Was Not Sleeping to his daughter, Sophie (1).PHOTO: CHRISTINE O’CONNOR
A Dunedin man is one of the brains behind a new book aimed at easing anxiety for the children of firefighters.

Dunedin station officer and Brighton volunteer firefighter Kris Kennett came up with the idea to publish a book for the children of New Zealand firefighters to cultivate positive emotional wellbeing.

Working with the New Zealand Firefighters Welfare Society, of which he is a regional representative, they commissioned the book from author Avril McDonald.

The finished product, The Wolf Was Not Sleeping, will be launched today to coincide with International Firefighters Day.

"All the [existing] books are sort of just talking about what mum or dad might have done as their role, but never really touched on the emotional conversation side of it."

Some children could have concerns about why their parent had to run out the door at a moment’s notice, or about the type of work they were doing — for example, helping to fight the Australian bushfires.

The messaging was "quite subtle", and could be helpful for parents in lots of different roles, he said.

Mr Kennett has seen the issue from both sides, as his father was also a volunteer firefighter.

"I’ve sort of lived and breathed the fire service all my life, so I just had an understanding."

Due to Covid-19 restrictions, the book will be released digitally with a storytelling session today.

Once restrictions ease, two copies will be sent to every brigade, office and training centre in the country.

Then personnel keen for a copy could request one.

Three thousand copies will be made available by the society to its members, and Fire and Emergency New Zealand is offering 6000 copies.

The book will also go on sale to the general public in June.