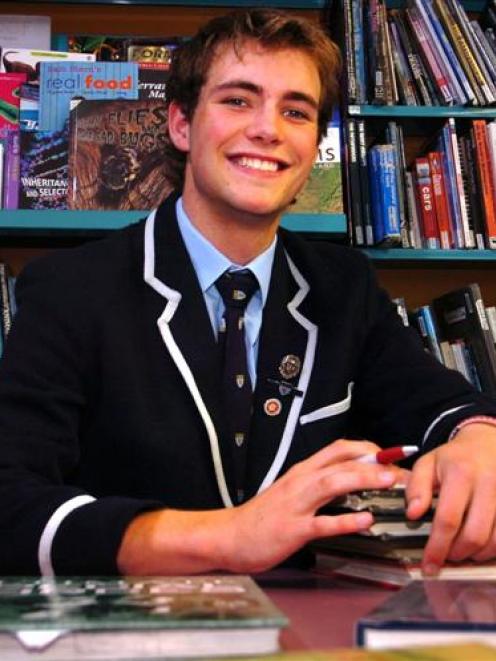 Wade Pearson (17), of Kings High School, won top prize in his age group in an international writing exam. Photo by Peter McIntosh.
A nature trek in the woods, an incestuous pair of alcoholic petty criminals and a hole in the ground appear to be an unlikely basis for a story.

That is unless you are Wade Pearson (17), whose concoction turned out so well it won the top spot for year 13 pupils in New Zealand in an international writing exam last month.

The Kings High School pupil wrote the top story in June this year through the University of New South Wales International Competitions and Assessments for Schools (ICAS), which offer a range of externally marked exams to New Zealand schools.

He and one other pupil at his school sat the ICAS writing exam.

They were given a picture of a boy and girl in a forest looking at a crack in the ground through which white light was shining and were instructed to write about it.

It took him one hour and 400 words to write a story about a brother and sister - whose pasts were marked by petty crime, arson and alcohol abuse - who had gone to visit their aunt.

She took them on a nature walk and the reader was told the brother secretly relished the thought of spending hours in the woods with his sister.

"I wanted to throw something in there that would get people's attention. You want that little X-factor, a bit of zing," he said in explanation of the interesting plot.

He had been competing in the ICAS writing exams for the past three years and said he was happy to be awarded the top mark for year 13.

Despite his recent accolades, he does not view himself as a serious writer, preferring to leave his career options open.

"It's cool to have a nice story that people will read and get pleasure from. It's nothing too serious . . . it's not a personal expression of my feelings."

A self-confessed nerd, he was also involved in non-academic activities including water polo, handball and salsa dancing, and he encouraged other pupils to give everything a go.

"You have to put a positive spin on things. If you do everything, something is going to work."

Kings High School principal Dan Reddiex described Wade as "a wonderful advertisement for our school" due to his fantastic talent as an academic and to his being a well-rounded pupil.

Wade said he planned to attend the University of Otago next year to study linguistics.

He will be awarded a medal for his top placement at a ceremony at Te Papa in Wellington on December 5.

Mr Reddiex and Wade's mother will join him for the trip.