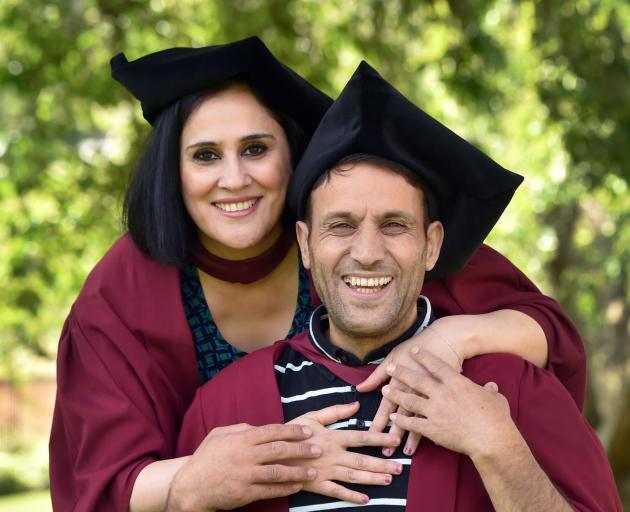 "After all of the effort, a new world is coming forward, a new chapter of my life," Ms Almomani said.

Coming to New Zealand and their academic studies had changed her life and that of her husband, and their children’s future.

"It will be a special day," Mr Mayyas said, reflecting on today’s 4pm ceremony at the Dunedin Town Hall, when both will graduate with PhDs from the Otago pathology department.

Ms Almomani said her husband’s support had been "very important to me as a mum", knowing that when she had to stay up late and work in the laboratory until 10pm, 11pm or later, her husband was at home, caring for their three children.

Mr Mayyas said they had always done "as much as we can to support the other person" when particular help was needed.

Their three children, Alaa (15), Mohammed (14) and Joanne (12), had also been strongly supportive, and the university had provided strong backing.

Before Ms Almomani began her Otago PhD studies, she was a lecturer at Jordan University of Science and Technology.

Mr Mayyas had been lecturing at the same university in the Faculty of Medicine.

Ms Almomani’s first day in Dunedin about six years ago was so cold she cried.

Six years later, the family was happily settled in the city and getting ready for a big occasion.

Her doctoral research had probed aspects of the genetics of "pre-eclampsia methodologies and analytics" and helped identify biomarkers that could lead to earlier diagnosis of pre-eclampsia, a disorder of pregnancy characterised by the onset of high blood pressure.

Mr Mayyas found "novel mechanisms" in his study of aspects of DNA demethylation, a chemical process linked to leukaemia.

Balancing their research with home life had meant juggling child care with running experiments, she said.

Prof Ian Morison, of the pathology department, who supervised the research of Mr Mayyas and co-supervised Ms Almomani’s research, said they were a "wonderful family" and their achievements in Dunedin were huge.

Her family loved being in Dunedin, she said.

"People are very humble and we feel very supported here."