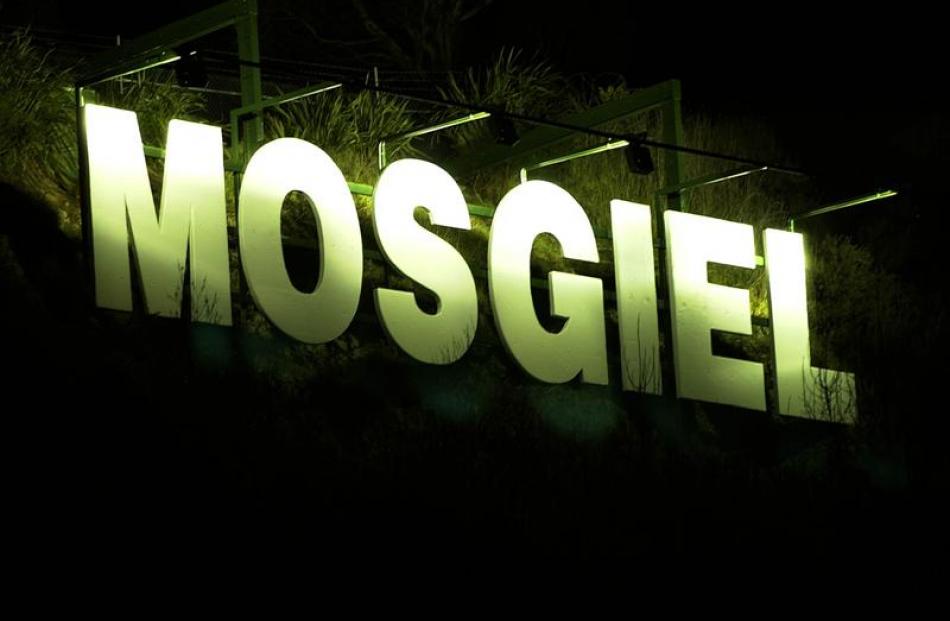 The Mosgiel sign overseeing Mosgiel, in which the new subdivision is planned. Photo by ODT.

A man broke down and cried in Dunedin yesterday while talking about a new proposed road and subdivision in Mosgiel.

Mosgiel residents Rod and Shona Innes, of 114 Hagart-Alexander Dr, and Matt and Tina Paul, of 110 Hagart-Alexander Dr, gave a Dunedin City Council hearing committee in the Municipal Chambers yesterday the reasons why they wanted the consent for a new 82-lot subdivision to be declined.

The primary concern was the effect of a new public road proposed to serve the subdivision, on undeveloped residential-zoned land at 67 and 67A Gladstone Rd North.

Consultant surveyor Kurt Bowen, speaking for his client developer, Murray Frost, of Minaret Resources Ltd, said all access options to the landlocked subdivision had been considered.

An emotional Mr Paul broke down three times when presenting his submission.

Battling to speak, Mr Paul said a new access road, and bridge or culvert system, built alongside his western boundary fence would increase stress and noise levels and decrease his quality of life.

If the project was built, their house of 12 years would became a corner section and the property value would decrease, he said.

''If this subdivision goes ahead as proposed we will have a major lifestyle change for the worse,'' he said.

''We can see stress and health issues and can't afford to outlay money to mitigate and address all the noise-related effects.''

He then read a letter by his wife, who was seated nearby, crying.

''Minaret's plans will destroy our peaceful place,'' Mrs Paul said in the letter.

She was ''insulted'' with a $5000 offer by Minaret to double-glaze some windows in their home.

Mrs Innes, speaking at the meeting on behalf of herself and husband, said their main concerns included the access from their driveway.

Access would be difficult because the new road would create a four-way intersection with Beech St and Hagart-Alexander Dr.

Their home of 14 years would lose its ''quiet tranquillity and privacy'' and the proposed planting of 3m trees near the road to negate noise would block morning sun, she said.

Mrs Innes said they were offered $5000 to double glaze three bedrooms if a consent form was signed.

''We do not consider this a fair compensation for disruption caused through no fault of our own,'' Mrs Innes said.

Councillor Benson-Pope, the committee chairman, said the committee wanted Mr Bowen to provide more information including sketches of design for the intersection and to explore options for an emergency exit for vehicles, another accessway for pedestrians and cyclists to Gladstone Rd North, noise-mitigation options and the viability of purchasing the two properties.

Mr Bowen said he would provide design sketches and was in talks with Brooklands on opportunities for emergency access but there were no plans to build an alternative pedestrian access to Gladstone Rd North. Sound mitigation options would be researched, Mr Bowen said.

In regard to land purchase, Murray Frost talking directly to the committee, said he would be willing to buy one or both houses if the agreed price was fair.

The meeting was adjourned and Crs Benson-Pope, Andrew Noone and Lee Vandervis would reconvene after they visited the Mosgiel land and the concerned residents' homes and Mr Bowen had provided the additional information.