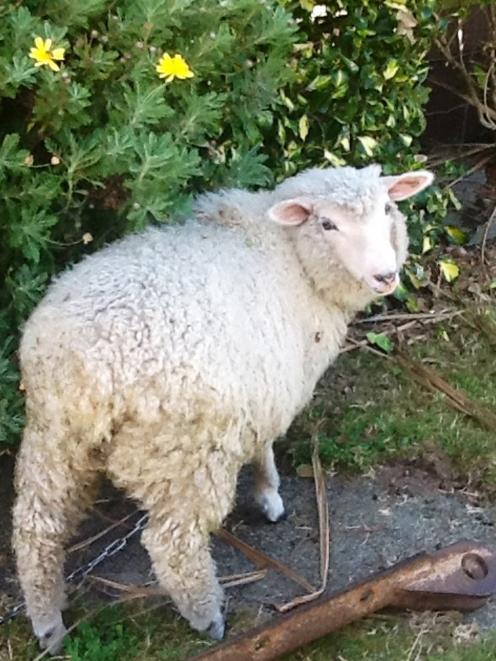 Larry the lamb. Supplied photo
Two Dunedin teens have admitted stealing and then beating a much-loved pet lamb to death.

Jesse James Kelly (18) and Codie Tobin (17) pleaded guilty in the Dunedin District Court yesterday to joint charges of stealing a sheep and then beating it, causing it to die.

Police, in the summary of facts, said the pair left Kelly's property just after midnight on July 21, and entered a neighbour's rear yard.

There they removed a pet lamb from its metal chain and took it to the back of Kelly's property.

Police said the pair then delivered a ''sustained beating'' to the lamb using a wooden club.

After beating the lamb to death, the pair then placed the carcass on a wheelbarrow and dumped it on the footpath of its owner's home.

The pair then set fire to the lamb's carcass and fled the scene.

Neighbours noticed the burning lamb and put out the fire.

Police said the lamb was beaten to such an extent that pieces of its skull and brain were found in the defendants' rear yard.

The pair face a maximum penalty of three years' imprisonment under the Animal Welfare Act for the charge of willfully ill treating the sheep by beating it, causing it to die.

Larry the lamb was the family pet of Matt Johnston (28), who told the Otago Daily Times following the incident that his 2-year-old daughter ''absolutely loved him, loved him to bits''.