'Terrific' to be given father's WW1 paybook 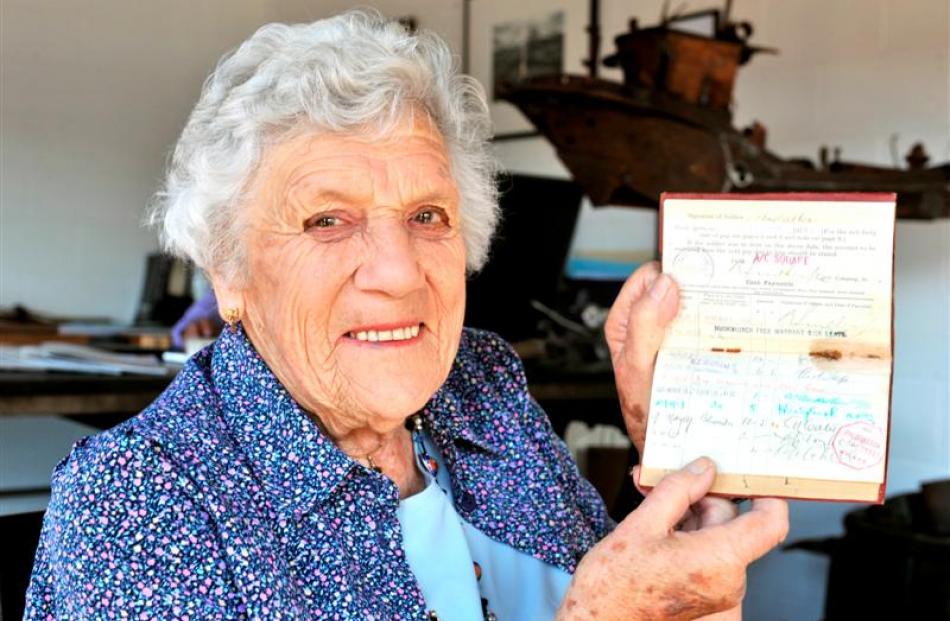 Waikouaiti resident Pat Heckler (92) is thrilled to be given her late father's World War 1 paybook, which was recently found under a staircase in the Reed Building in Dunedin. Photo by Linda Robertson.

The discovery in Dunedin of a World War 1 soldier's paybook has delighted his 92-year-old daughter.

Pat Heckler, of Waikouaiti, drove to Dunedin yesterday to retrieve the paybook issued to her father, the late John Preston, of Goodwood.

''It's terrific. I'm a great hoarder and this is just astonishing,'' she said.

Mr Preston, a sheep farmer, served as a gunner in England.

His paybook recorded his ''net daily rate'' of 2 shillings and sixpence (half a crown) for ''active service in the field''.

Mr Preston's paybook was found in a box, tucked underneath a staircase inside the old Reed Building in central Dunedin just before Christmas.

Max Bennett found the box and its historic contents while clearing part of the building for Dunedin developer Lawrie Forbes.

There was little else in the box, just a bit of rubbish, he said.

Mrs Heckler was thrilled to be given the paybook yesterday, having heard Mr Forbes talk about its discovery on a 39 Dunedin News programme recently.

She is the last surviving child from Mr Preston's first marriage.

Her older brother, John Preston jun, was killed in an accident in the Manuka Gorge about 11 years ago, and their mother, Florence, died at a young age in the mid-1920s.

Mr Preston remarried and had four other children, Mrs Heckler said. He died many years ago, she added.

''When he came back from the war, he went farming at Flag Swamp and was a farmer his whole life. His father was a farmer, and the family home was Centrewood in Goodwood,'' Mrs Heckler said.

She remembered watching her father play billiards at the Palmerston RSA, where she and her brother were told to ''be quiet and not make any trouble''.

''He was a great storyteller; you could never get him off the stories of the past.''