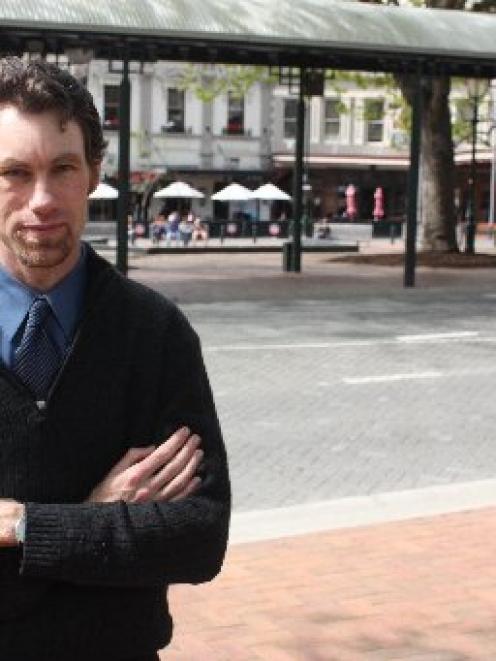 Explore New Zealand tours owner Andrew Rutherford says the Dunedin City Council is looking after the interests of cruise-ship companies and not local business by not allowing him to sell tickets to his tours in the Octagon. Photo by Tim Miller.
A Dunedin tour operator says the Dunedin City Council is favouring big cruise-ship companies by not allowing local operators to sell their tours in the Octagon.

The shuttles that transport cruise-ship passengers from the Octagon are provided by cruise-ship companies and approved by the council.

Andrew Rutherford, who owns transport and tour bus company Exploring New Zealand Ltd, was told at the end of last year he would not be able sell tickets for his tours in the Octagon.

Under the mobile trading bylaw, the Octagon is a restricted area.

Selling goods or services is not allowed without a fixed location.

''What is the difference between me selling my tours in the Octagon and the cruise companies doing the same thing?'' he asked.

Mr Rutherford said proposed changes to the mobile trading bylaw should have addressed the issue but instead would make the bylaw more restrictive.

Operators were still able to market their businesses to cruise-ship passengers but had to sell tickets through the council's i-Site office in Princes St.

Not all tour companies agreed with Mr Rutherford.

Richard Trainor, the owner-operator of Good Company, said the present bylaw was working well and meant everyone was on a level playing field.

If everyone was allowed to sell tours in the Octagon, the same issues which saw operators banned from the wharf would shift to the city, Mr Trainor said.

''The thing about the law, it keeps everything nice and clean for visitors and that's what you want to be presenting - not a whole bunch of operators climbing all over each other,'' he said.

Dunedin City Council environment health team leader Ros MacGill said operators could have their say on the proposed bylaw changes when it was discussed by the council later in the year.