Towering challenge ahead of Brodie 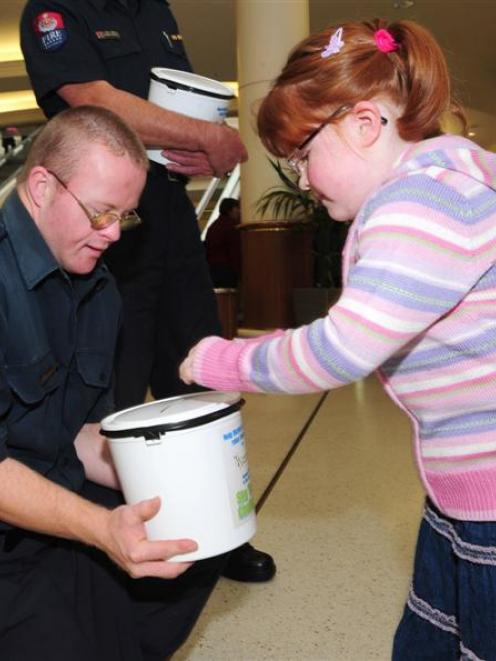 Brodie Carvalho collects money in Dunedin's Meridian Mall ahead of his attempt at the Sky Tower Challenge. Photo by Craig Baxter.
The training is over and it is time for the hard yards.

Mosgiel man Brodie Carvalho is ready for what could be a record-setting Sky Tower climb in Auckland next weekend and with his biggest fans right behind him, he is confident of success.

On Saturday, Mr Carvalho (28) will be the first person with Down's syndrome to attempt the annual 47-storey Sky Tower climb in full fireman's kit.

With 24,292 steps already climbed in training, Mr Carvalho's support team of Dunedin firefighter Richard Yardley and swimming coach Dianne Holleyman believe the keen athlete is more than ready to tackle the 1029 steps of the Sky Tower.

Mr Yardley, who has climbed every training step along the way, said he and Mr Carvalho were resting before the challenge.

For the past six months, they had trained by running up and down the internal staircase at Otago House six times a day, up to three times a week. To add to that challenge, they had to fine-tune their approach around Mr Carvalho's thyroid condition, which makes it difficult for him to release heat build-up from his body.

Other training included running up and down the bleachers at Moana Pool to get used to humid conditions and aqua-jogging in the Mosgiel and Moana pools.

Much of the training was done wearing full firefighting kit and a self-contained breathing apparatus - a combined weight of about 27kg - as would be worn during the challenge.

Although Mr Carvalho was "supremely fit" and had met all his challenges, he still had "much satisfaction in ripping up the completed [training] schedule", Mr Yardley said this week.

The climb is expected to take Mr Carvalho 15 to 20 minutes with Mr Yardley's wife Christine, a cardiac nurse, monitoring Mr Carvalho's heart along the way.

The pair will stop every five flights to draw a deep breath.

The friends will climb the steps of the Sky Tower with more than 100 firefighters as part of the annual firefighters' challenge to raise funds for the Leukaemia and Blood Foundation.

They had raised more than $7000 for the foundation through auctions, donations and public appeals, Mr Yardley said.